SEOUL, May 3 (Yonhap) -- President Moon Jae-in on Tuesday promulgated two controversial bills on prosecution reform at the final Cabinet meeting before his term ends next week, paving the way for eventually stripping the prosecution of its power to investigate.

The promulgation came hours after the ruling Democratic Party (DP) railroaded the last remaining bill on prosecution reform through the National Assembly amid opposition protest, completing its push to reduce and ultimately remove the prosecution's investigative powers.

"Concerns about political neutrality, fairness and selective justice in the prosecution's investigation have still not been resolved," Moon said of the need for prosecution reform. "And there are evaluations that (reforms) have not been enough to win public trust, which is why the National Assembly has taken a step further in separating investigations and indictment."

"It did not even take a day for the country's 74-year-old criminal justice system to collapse and for parliamentary democracy and the rule of law to die," the PPP's floor spokesperson Park Hyeung-soo said. "What do they really want to achieve by depriving the prosecution of its investigative powers?"

The PPP claimed that separating investigation and prosecution rights is not a trend that can be seen in advanced countries and that it will cause "extreme inefficiency" in the criminal justice system.

The legislation will go into effect four months after its promulgation.

The DP and the PPP have been wrangling for weeks over the bills on prosecution reform, as the DP has insisted they are necessary to ensure the prosecution does not abuse its investigative powers for political purposes, while the PPP has countered they will leave the people with fewer means to seek justice for crimes.

The two sides reached a compromise deal under which the prosecution's investigative powers would be reduced from six crime types to two before being removed completely, but the PPP backtracked following criticism that lawmakers colluded to shield themselves from prosecution investigations, as the agreement calls for stripping the prosecution of its right to investigate election crimes. 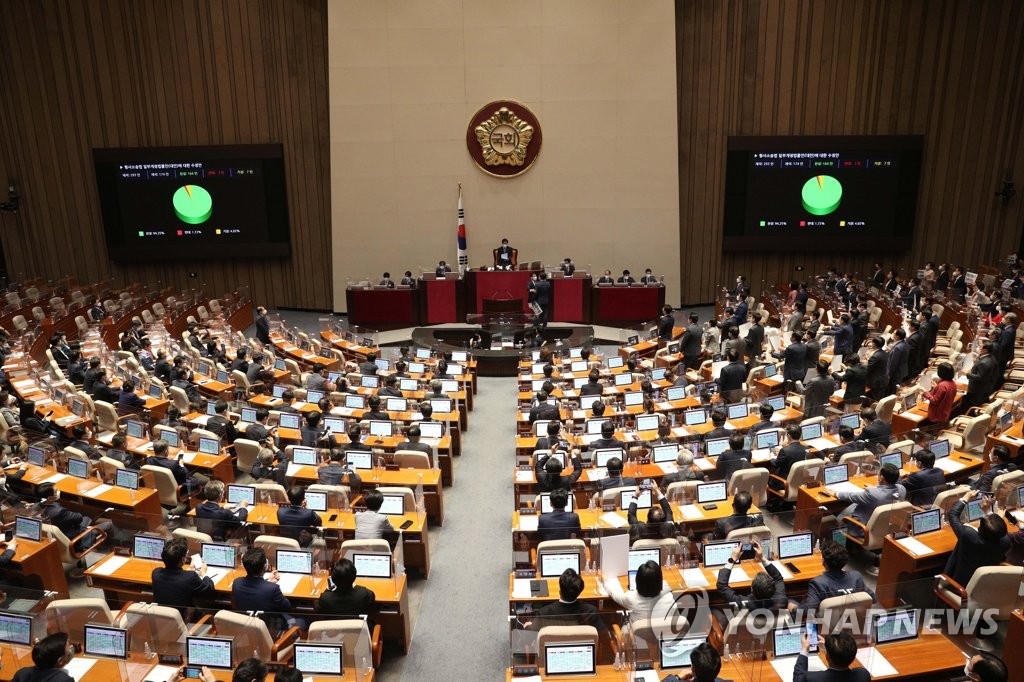 The DP, which holds 171 out of 300 seats, has tried to pass the two bills and get them signed into law before the May 10 inauguration of President-elect Yoon Suk-yeol, because Yoon would be expected to veto the bills.

Following the promulgation, Deputy Prosecutor-General Park Sung-jin told reporters the reform bills were not passed through a legitimate process, pointing out that the National Assembly and the government did not undertake in-depth discussions and deliberations required to gain public support.

"The Supreme Prosecutors Office will review all possible legal measures (to reverse the legislation), including a constitutional suit," he said.

On the other hand, police said in an official statement that they will reinforce their organization to improve their probe capacity and cooperate with the prosecution with mutual respect. Police are expected to have greater investigative power following the reform.

"We will work to conduct thorough investigations into criminal cases to minimize possible inconveniences people may feel," police said.