SEOUL, May 3 (Yonhap) -- The transition team on Tuesday unveiled 110 key policy tasks to pursue under the government of incoming President Yoon Suk-yeol, including a "revolutionary" reinforcement of capabilities to respond to North Korea's nuclear and missile threats and scrapping the nuclear phaseout policy.

The tasks are aimed at realizing six broader goals that the incoming government plans to seek under the administrative vision of "A Republic of Korea that leaps anew, a people's nation of co-prosperity," the transition team said. 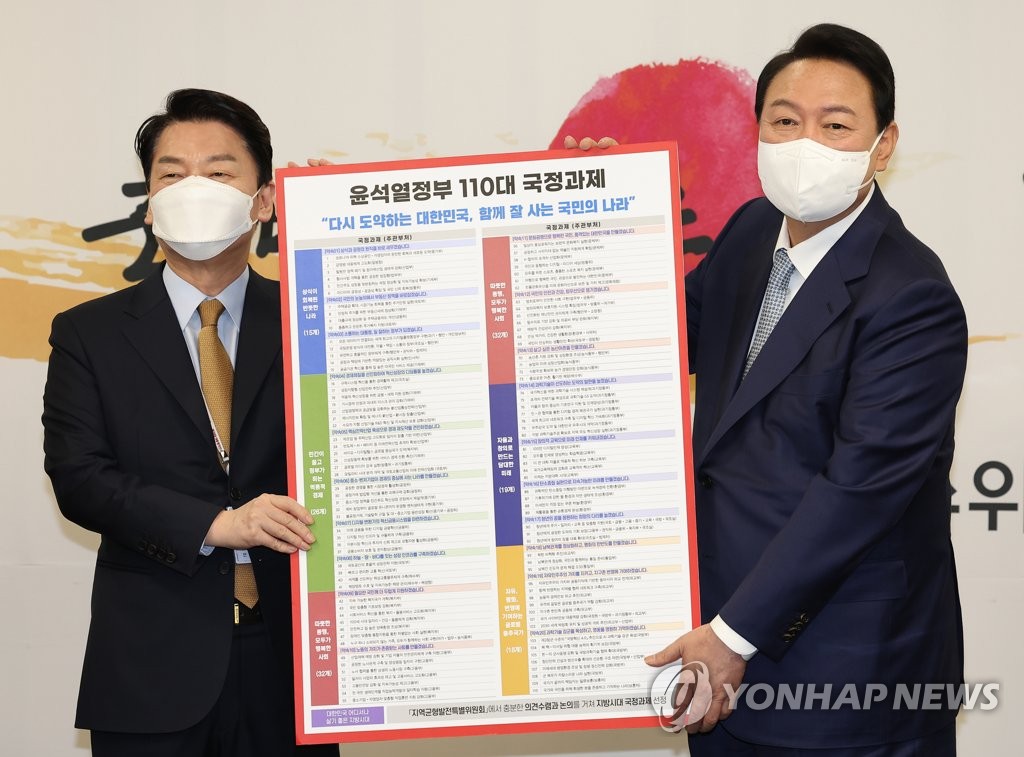 The six goals are to establish an upright country where common sense is restored; a dynamic economy led by the people and backed by the government; a society where everyone is happy, in warm company; a bold future created through freedom and creativity; a global leading nation that contributes to freedom, peace and prosperity; and an era of regions that makes it good to live anywhere in the Republic of Korea.

The 110 tasks that will help realize the goals range from helping small businesses fully recover from the damage of the COVID-19 pandemic to expanding the housing supply and scrapping the nuclear phaseout policy.

The tasks for foreign policy and security include pursuing North Korea's "complete and verifiable" denuclearization, normalizing inter-Korean relations, strengthening the South Korea-U.S. military alliance, and a "revolutionary" reinforcement of the country's capability to respond to North Korea's nuclear and missile threats.

Economic security is an overarching theme, with tasks such as securing an "overwhelming lead" in the semiconductor, artificial intelligence, battery and other future strategic industries.

By doing so, the incoming administration expects to increase semiconductor exports by over 30 percent from $128 billion last year to $170 billion by 2027, the final year of its term; maintain its biggest share of the global battery market; and become one of the world's top three robot producers.

Scrapping the nuclear phaseout policy will entail pursuing Yoon's campaign pledges to resume construction of the Shin-Hanul No. 3 and No. 4 nuclear reactors and actively seek contracts to export 10 nuclear reactors by 2030.

Among other tasks are scrapping the justice minister's right to direct specific investigations by the prosecution, revitalizing the economy through regulatory reform, and increasing the salaries of conscripted soldiers.

Excluded from the tasks were Yoon's campaign promises to abolish the Ministry of Gender Equality and Family and deploy additional units of the U.S. THAAD antimissile system in the country.

The four principles to guide the actions of public officials in executing the tasks are national interest, pragmatism, fairness and common sense.

The transition team said it expects the incoming government will need 209 trillion won (US$165 billion) more than this year's government budget to implement the tasks.

It also said it created an image of the 110 tasks, converted it into a non-fungible token (NFT) and gave it to Yoon in the hopes he will make his promises to the people "non-fungible" over the next five years.