SEOUL, May 3 (Yonhap) -- Construction permits for large buildings in South Korea shrank nearly 10 percent in the first quarter of the year amid rising interest rates and the coronavirus pandemic, government data showed Tuesday.

Construction permits issued for new large buildings stood at 46,435 in the January-March period, down 9.8 percent from a year earlier, according to the data from the Ministry of Land, Infrastructure and Transport.

Permits issued for the greater Seoul area, which includes the adjacent province of Gyeonggi and the western port city of Incheon, decreased 9.3 percent, with those for the rest of the country tumbling 19.4 percent.

South Korea's central bank has conducted four interest rate hikes since August last year to rein in inflation and household debt, with the country struggling to cope with a large number of coronavirus infections.

Despite a drop in the number of construction permits, the total space of new buildings authorized climbed 11.6 percent on-year to 40.75 million square meters in the three-month period.

The data also showed the number of groundbreakings for new buildings coming to 34,726 units in the first quarter, down 14.4 percent from the same period a year ago.

The number of completed buildings across the nation amounted to 35,716 units during the period, down 7.7 percent from a year earlier. 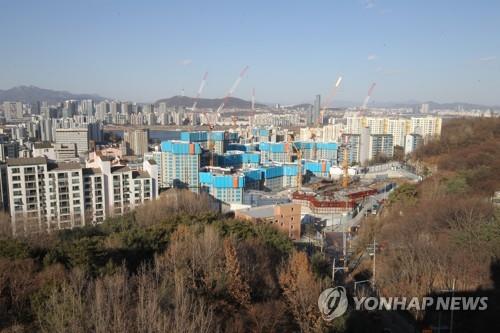