SEOUL, May 3 (Yonhap) -- Prime Minister nominee Han Duck-soo said Tuesday that Japan will benefit the most if South Korea does not join a mega free trade agreement involving 11 Asia-Pacific nations.

Han made the remark during his confirmation hearing, as he supports South Korea's bid to join the Comprehensive and Progressive Agreement for Trans-Pacific Partnership (CPTPP).

"The issue of opening the market to others is about expanding our overall economic territory," Han said. "If we are left out from multilateral free trade involving many countries, we will lose our ground."

The CPTPP involves 11 nations, including Singapore, Australia, New Zealand, Japan, Canada, Mexico and Vietnam. It had accounted for around 15 percent of the world's total trade volume of US$5.2 trillion as of 2020. 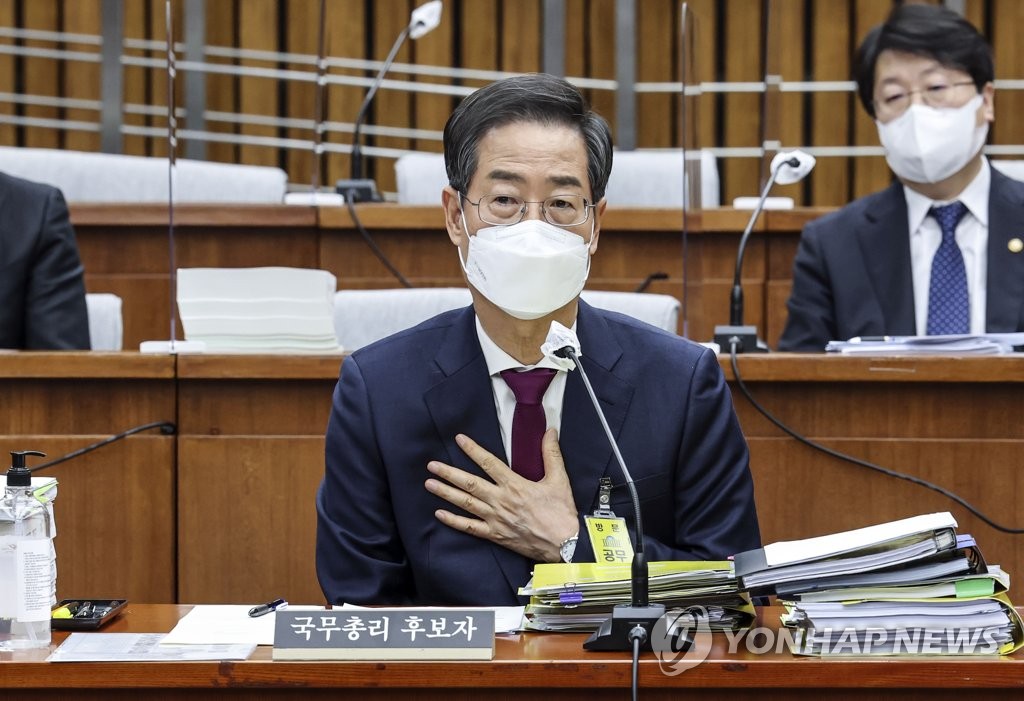 Han, who has been nominated as the first prime minster of the incoming Yoon Suk-yeol government, said he will focus on solving "structural problems" in the country's economy, such as the low birth rate and fiscal soundness.

Also during the hearing, Han said he is sorry for various allegations raised against minister nominees who were recommended by him, but said there are "realistic limits" to vetting them.

His answer comes after Education Minister nominee Kim In-chul resigned earlier in the day amid allegations of favoritism related to his family's reception of scholarships from a nonprofit organization. Health Minister nominee Chung Ho-young has also been in hot water over allegations he used his position to get his children into medical school.

"There are realistic limits for a detailed vetting and for that part, I am sorry to the people," Han said.

During Monday's hearing, Han was busy explaining conflict of interest allegations related to his home rental in the 1990s and also the hefty salary he received as an adviser to law firm Kim & Chang.

On criticism over his revolving door move, in which he switched back and forth between the government and Kim & Chang, Han reiterated that there was no conflict of interest issue.

Han will be cleared for appointment once the National Assembly adopts a report on his confirmation hearing. In South Korea, the prime minister is the only Cabinet post that requires parliamentary approval.

(LEAD) PM nominee says Japan will benefit most if S. Korea does not join CPTPP

(LEAD) PM nominee says Japan will benefit most if S. Korea does not join CPTPP