SEOUL, May 3 (Yonhap) -- South Korea's financial regulator on Tuesday urged local banks to step up efforts on effective risk management, as uncertainty has arisen at home and abroad due to major economies' monetary tightening and mounting inflation pressure.

Jeong Eun-bo, head of the Financial Supervisory Service (FSS), made the call during a meeting with the heads of 17 local banks in central Seoul after the government reported that consumer prices spiked 4.8 percent last month from a year earlier, the fastest pace in more than 13 years.

The meeting also came ahead of the U.S. Federal Reserve's meeting this week, where it is highly expected to raise its interest rate by half a percentage point to combat runaway inflation, a move that could prompt South Korea's central bank to follow suit in a rate-setting meeting scheduled for later this month.

"At a time when some are raising the possibility of a giant step, the European Central Bank appears set to raise its interest rate in the second half," Jeong said, referring to a possible 0.75 percentage point rate hike in the U.S.

"With worries mounting over economic recessions in advanced countries, our economy has also been faced with increasing downward risks from three highs -- high inflation, high interests and high exchange rates," he added.

Jeong urged local banks to beef up their capacities to absorb shocks and keep their functions intact in providing funds for those in need, while asking them to set aside a sufficient amount of bad-debt reserves on the perception that a crisis is looming large.

He also said banks should take extra efforts for effective debt management, amid worries that market liquidity could dwindle, and be cautious in making decisions on buying back shares or paying dividends in a way that they remain capable of coping with rising risks. 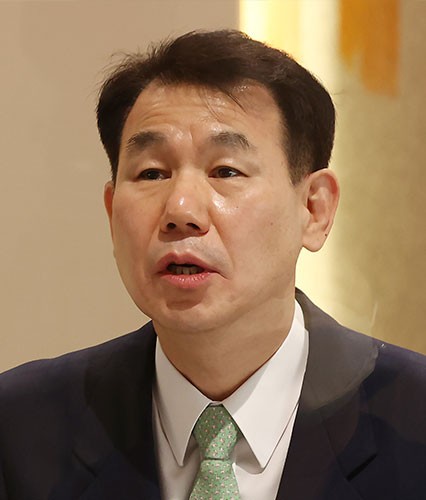