If Wang, considered one of the closest aides to Chinese President Xi Jinping, attends the ceremony, he will be the highest official to lead a Chinese delegation to a South Korean presidential inauguration.

The organizing committee is expected to announce details of foreign delegates Thursday. 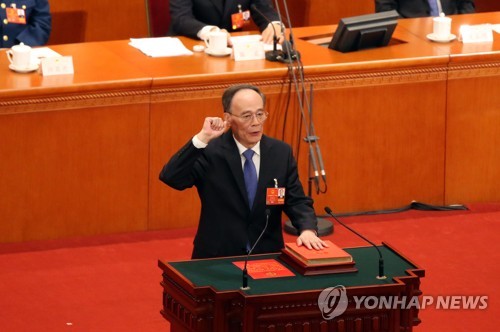 In 2013, Liu Yandong, then state councilor for education, culture and science affairs, attended the ceremony for then President Park Geun-hye.

In 2008, Tang Jiaxuan, then state councilor for foreign affairs, led the Chinese delegation to the inauguration of then President Lee Myung-bak.

The United States is expected to send officials other than those in charge of diplomacy and security, as diplomatic and security officials will accompany President Joe Biden in his trip to Seoul from May 20-22 for a summit with Yoon.