SEOUL, May 4 (Yonhap) -- Justice Minister nominee Han Dong-hoon said he will look for ways to minimize any negative impacts that the recently enacted laws on prosecution reform could have on ordinary people, according to a lawmaker Wednesday.

Han made the remark in a document submitted to independent Rep. Yang Hyang-ja for his confirmation hearing, stressing ordinary people will take the brunt of the legislation centering on reducing and ultimately abolishing the prosecution's investigative powers.

The legislation, consisting of revisions to the Criminal Procedure Act and the Prosecutors' Office Act, was approved and promulgated Tuesday at the last Cabinet meeting that President Moon Jae-in held before leaving office next week.

The ruling Democratic Party, which controls the 300-member National Assembly with 171 seats, rammed the widely unpopular bills through despite strong protests from the main opposition People Power Party, civic groups and other critics.

"After all, those who get hurt the most would be ordinary people if the prosecution is completely deprived of all investigative powers," Han said. "In order to minimize such damage, I will ... prudently study possible means."

Han, a senior prosecutor considered the right-hand man of President-elect Yoon Suk-yeol, claimed the reform bills paved ways for "institutional loopholes" that could allow criminals to go unpunished, while powerless people could end up suffering.

"If the prosecution's authority to conduct direct investigations or demand supplementary probes is scrapped, it will cause delays in cases ... hamper the country's ability to respond to major crimes and make it impossible to launch an investigation into people with power, eventually hurting ordinary people," he added. 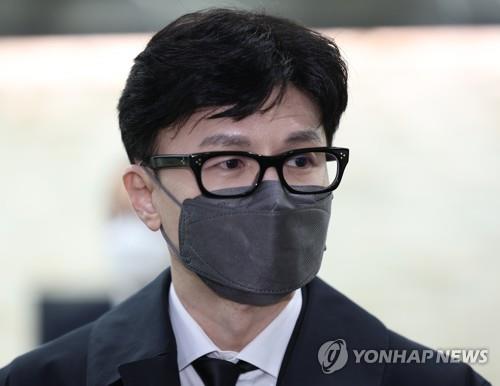