SEOUL, May 4 (Yonhap) -- The anti-corruption investigation agency on Wednesday announced its decision to clear President-elect Yoon Suk-yeol of charges of attempting to meddle in the 2020 parliamentary elections while he was serving as prosecutor general.

The announcement was made as the Corruption Investigation Office for High-ranking Officials (CIO) wrapped up its probe into the election meddling scandal that had plagued Yoon through his presidential election campaign.

Yoon had been accused of having Son Jun-sung, a prosecutor under his direct command at that time, collude with the main opposition People Power Party (PPP) to attempt to investigate pro-government figures just ahead of the general elections in April 2020 while he was the top prosecutor.

Announcing its probe result, the CIO said it has partially confirmed the suspected collusion between Son and Kim but found Yoon of free of the election meddling charges.

The CIO indicted Son without detention on charges of leaking official secrets while on duty, public official election violations and others.

The agency also referred Kim to the prosecution for possible indictment on similar charges, as he was a parliamentary candidate at the time of the alleged collusion and thus outside of the CIO's scope of indictment.

The allegations were first raised by an internet news outlet in early September, and the CIO had subsequently booked Yoon on four charges, including abuse of power and violating the public official election law. 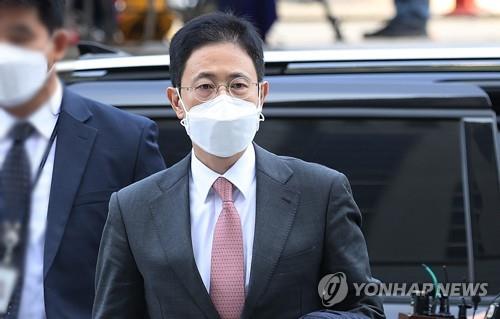