SEOUL, May 6 (Yonhap) -- South Korea's central bank is likely to deliver a back-to-back key interest rate rise in May as part of its efforts to rein in inflation, a major local brokerage house said Friday.

The Bank of Korea (BOK) raised its policy rate by a quarter percentage point to 1.5 percent during the April meeting, the fourth increase since August last year.

The BOK is slated to hold its next rate-setting meeting on May 26, the first such meeting to be chaired by new BOK Gov. Rhee Chang-yong, who took office last month.

"Accelerating consumer prices and inflation expectations (in South Korea) have resulted in a greater need for the BOK's monetary policy board to rush an additional interest rate increase," Kim Ji-man, an analyst at Samsung Securities Co., said.

Indeed, the BOK's minutes of its April policy meeting, which were disclosed Tuesday, showed that its members had called for further rate increases to tame inflation, he said.

This year, the BOK is expected to jack up its benchmark rate three times in May, July and October, raising the key rate to 2.25 percent at the end of the year, or 0.25 percentage point higher than an earlier estimate, the analyst added.

The BOK has been pushing to "normalize" its long loose monetary policy mobilized to bolster the pandemic-hit economy in an effort to tackle mounting inflationary pressure stemming from high energy and commodity prices, which have been caused by the war in Ukraine and a recovery in demand amid waning coronavirus infections.

South Korea's consumer prices shot up 4.8 percent in April from a year earlier, marking the highest on-year gain in more than 13 years.

The central bank's move is in line with the U.S. Federal Reserve's committment to restoring price stability.

On May 4, the Fed raised its benchmark interest rate by half a percentage point, the biggest hike in two decades, to fight inflation. 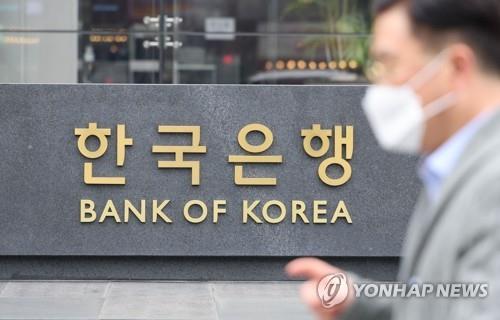