In a phone interview with Yonhap News Agency, Park Jie-won, the head of the National Intelligence Service (NIS), made the remarks, noting the North's possible nuclear test is likely to involve small warheads.

Yoon is set to be sworn in Tuesday. Biden is scheduled to arrive in Seoul on May 20, the eve of the leaders' first in-person summit

"If North Korea makes smaller, lighter nuclear warheads, they could be fit atop short-range ballistic missiles," Park said, describing what could be the North's seventh nuclear test as "very necessary" for the recalcitrant regime.

"Because they (nuclear-tipped missiles) can pose threats to South Korea and Japan, (we) attach great significance to the possible nuclear test," he added.

There have been apparent signs of the North's preparations for a fresh nuclear test, including work to restore underground tunnels at the Punggye-ri test site that it claimed to have dismantled in 2018 as a sign of willingness to denuclearize.

Punggye-ri has been the site of all six nuclear tests conducted by North Korea to date. The last test was held in September 2017.

On Friday, the U.S. State Department said the North is preparing its Punggye-ri test site and could be ready to conduct a test there as early as this month.

The North has not responded to calls by China and Russia to refrain from conducting a detonation test, according to the NIS chief.

"(North Korean leader) Kim Jong-un is different from his father. Kim Jong-il had openly asked for outside help, but Kim Jong-un has never sought assistance, while closing his border for two years," Park said. "He has even said his country does not need COVID-19 vaccines."

Asked about the likelihood of Pyongyang carrying out multiple nuclear tests this year, Park said it remains yet unknown.

The chief then advised the incoming government to maintain inter-Korean communication lines to continue dialogue.

North Korea has ratcheted up tensions on the Korean Peninsula. Kim recently hinted at the possibility of his country using nuclear arms for a preemptive attack, and the regime has conducted a series of missile launches, with the latest test-firing of a ballistic missile taking place Saturday. 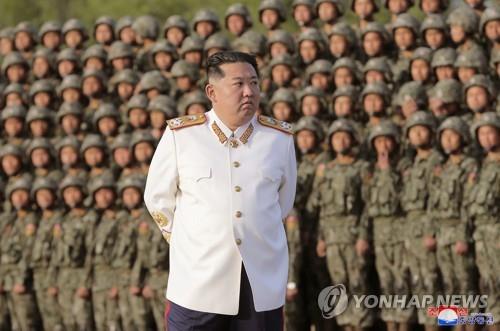