SEOUL, May 8 (Yonhap) -- North Korea's official news agency and other state media outlets remained silent Sunday about a submarine-launched ballistic missile (SLBM) that the country fired the previous day in its latest saber-rattling ahead of the inauguration of South Korea's incoming President Yoon Suk-yeol.

But on Sunday, the KCNA made no mention of the SLBM launch, which, according to South Korea's military, was carried out Saturday afternoon in waters off the North's eastern coastal city of Sinpo, the North's main submarine shipyard.

The Rodong Sinmun, the North's main newspaper, and other media outlets also remained mum on the launch.

The firing, which marked the North's 15th show of force this year, came just three days before Yoon takes office as South Korea's new president with a North Korea policy widely seen as more hawkish than that of outgoing President Moon Jae-in.

It was the second time in less than a week that North Korean state media outlets have not carried a report on major weapons testing. Last week, state media carried no reports after the North fired what is believed to be an intercontinental ballistic missile (ICBM), spurring speculation the launch ended in failure.

Meanwhile, Meari, a propaganda media outlet, criticized Yoon's plan to bolster defense against the North's nuclear and missile threats, including completing what is dubbed a "three-axis" system, saying such systems would be "useless" in the face of the country's "mighty force and absolute power."

The homegrown three-axis system consists of the Korea Massive Punishment and Retaliation (KMPR), an operational plan to incapacitate the North Korean leadership in a major conflict; the Kill Chain preemptive strike platform; and the Korea Air and Missile Defense system (KAMD).

"Such things as the introduction of foreign high-tech weapons, the development of arms on its own or the establishment of a South Korean-style three-axis system are nothing but useless things in the face of our mighty force and absolute power," it said. 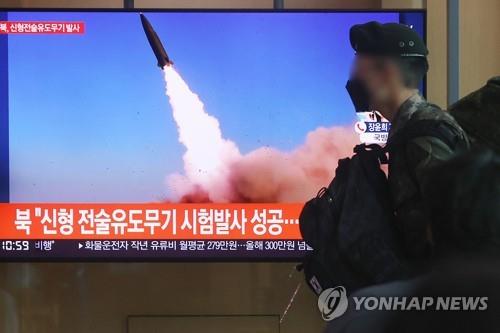