SEOUL, May 10 (Yonhap) -- New South Korean President Yoon Suk-yeol began his five-year term at the start of Tuesday in an underground bunker set up at his office building by receiving a briefing from the Joint Chiefs of Staff as the commander-in-chief.

Yoon was briefed at midnight in the underground bunker of the new presidential office in Yongsan, which will serve as the situation room of the national crisis management center.

The national crisis management center is used for meetings by the presidential National Security Council and was previously set up in the underground bunker of Cheong Wa Dae prior to the presidential office's relocation.

Yoon's predecessors, Moon Jae-in and Park Geun-hye, received their first JCS briefing at their homes, while former President Lee Myung-bak received his briefing at the office of his transition team.

Lee and Park held the calls at midnight, while Moon held the call at 8 a.m. as his term began immediately after a snap election that resulted from Park's removal from office. 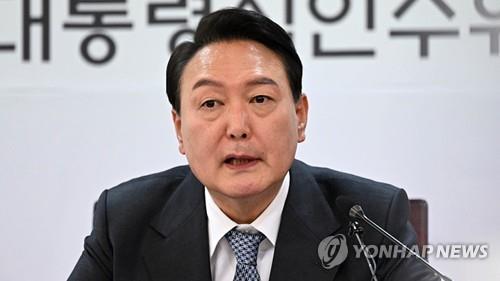 Marking the start of the Yoon administration, a bell-ringing ceremony was held at the stroke of midnight in downtown Seoul.

Twenty representatives selected from the general public, including a naturalized citizen, a space scientist and a North Korean defector, rang the bell 33 times at Bosingak Pavillion.

The event has its roots in the practice of the Bosingak bell being rung 33 times at 4 a.m. to signal the end of the night curfew and start of the new day during the Joseon Dynasty (1392-1910).

Prior to the bell-ringing ceremony, various cultural events were held to celebrate the start of the new government.

The formal inauguration ceremony of Yoon is scheduled for 11 a.m. at the National Assembly Plaza.