SEOUL, May 9 (Yonhap) -- More than half of single 20-somethings in South Korea do not want to have babies after marriage due apparently to concerns over high child-rearing costs in the country, a poll showed Monday.

According to a survey reported in a monthly economic journal by the state-run Korea Development Institute, 52.4 percent of unmarried Koreans in their 20s think it is OK not to have children after tying the knot.

The percentage is sharply up from 23.3 percent in the same survey conducted five years earlier.

In contrast, 28.3 percent of the surveyed said they plan to have children after marriage, up just 7 points higher than five years ago.

The findings are widely seen as showing a change in young Koreans' perception that having babies after marriage is not a must but an option. Analysts said high child-rearing expenses seem to be also responsible.

South Korea has been struggling with a chronically low birthrate as many young people delay or give up on getting married or having babies amid a prolonged economic slowdown and skyrocketing housing prices.

South Korea's total fertility rate -- the average number of children a woman bears in her lifetime -- hit a record low last year, marking the fourth straight year the rate was below 1 percent and highlighting the country's bleak demographic situation.

To address the situation, Seoul plans to increase tax benefits and other incentives on marriages and childbirths for young people, and put forward measures to encourage more couples to use parental leave and strengthen child care services. 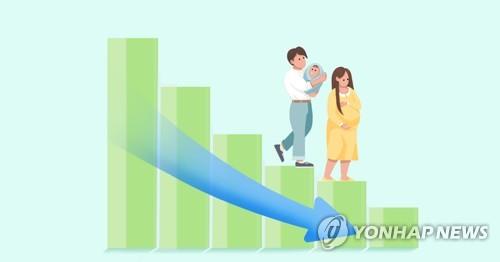 Over half of 20-somethings don't plan to have children after marriage: poll

Over half of 20-somethings don't plan to have children after marriage: poll