(ATTN: UPDATES with more remarks by nominee in last 3 paras)

Han, a senior prosecutor considered one of the closest confidants of incoming President Yoon Suk-yeol, made the remark at the opening of his confirmation hearing, about a week after the promulgation of the legislation centering on reducing and ultimately abolishing the prosecution's investigative powers.

"Public concerns are enormous. ... The laws will make it difficult to punish corrupt politicians and public officials, and the damage the people would suffer in the process is too apparent," Han told the confirmation hearing.

Last week, the ruling Democratic Party, which controls the 300-member National Assembly with 171 seats, railroaded the legislation, consisting of revisions to the Criminal Procedure Act and the Prosecutors' Office Act, before outgoing President Moon Jae-in promulgated them

In a previous document submitted to a lawmaker for his confirmation hearing, Han lashed out at the legislation and said he will look for ways to minimize any negative impacts that it could have on ordinary people.

"A genuine reform of the prosecution would mean building a system trusted by the public by bringing justice to corruption without giving in to powerful people," he noted.

"I will beef up the prosecution's political neutrality and fairness, and build a system to ensure checks and balances between the prosecution and the police." 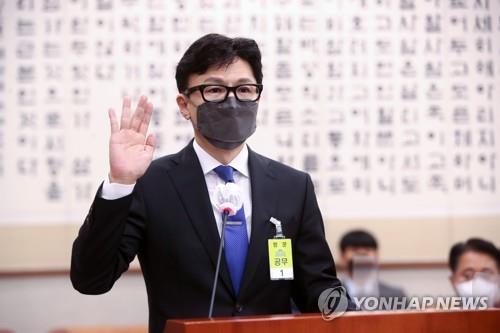 Some media outlets and ruling party lawmakers accused him and his wife of using their influence to help build their daughter's academic profile, including the publication of a number of academic research papers and the donation of laptops to a child welfare facility via an education charity club she runs.

"They have never been used for school admission, nor is there any plan to use them for that purpose," Han said, adding the papers are only short essays a high school student wrote for practice.