SEOUL, May 9 (Yonhap) -- South Korean stocks fell to about a 17-month low Monday on concerns over a global economic slowdown amid the U.S. central bank's monetary tightening and the prolonged lockdowns of major Chinese cities. The local currency weakened the most against the U.S. dollar in more than two years.

"Investors remain worried about high inflation and the Federal Reserve's monetary tightening, which could slow down the global economy," Seo Sang-young, an analyst at Mirae Asset Securities Co., said.

"Uncertainties have also continued over the Ukraine crisis and China's shutdown of major cities due to the COVID-19 pandemic," he added.

Shanghai has remained locked down since end-March, and Beijing has tightened travel and business restrictions over the spread of COVID-19. 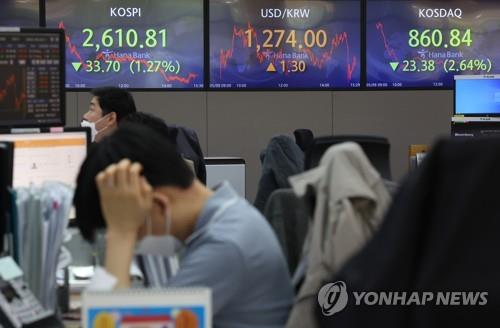 Bond prices, which move inversely to yields, closed higher. The yield on three-year Treasurys fell 8.4 basis points to 3.062 percent and the return on the five-year government bonds shed 5.0 basis points to 3.319 percent.