In his inauguration address at the National Assembly Plaza, Yoon outlined various challenges facing the country and the world from pandemics and rearrangements in global supply chains to record-low growth and rising unemployment.

"It is our generation's calling to build a nation that espouses liberal democracy and ensures a thriving market economy, a nation that fulfills its responsibility as a trusted member of the international community, and a nation that truly belongs to the people," he said before some 41,000 people gathered at the ceremony. 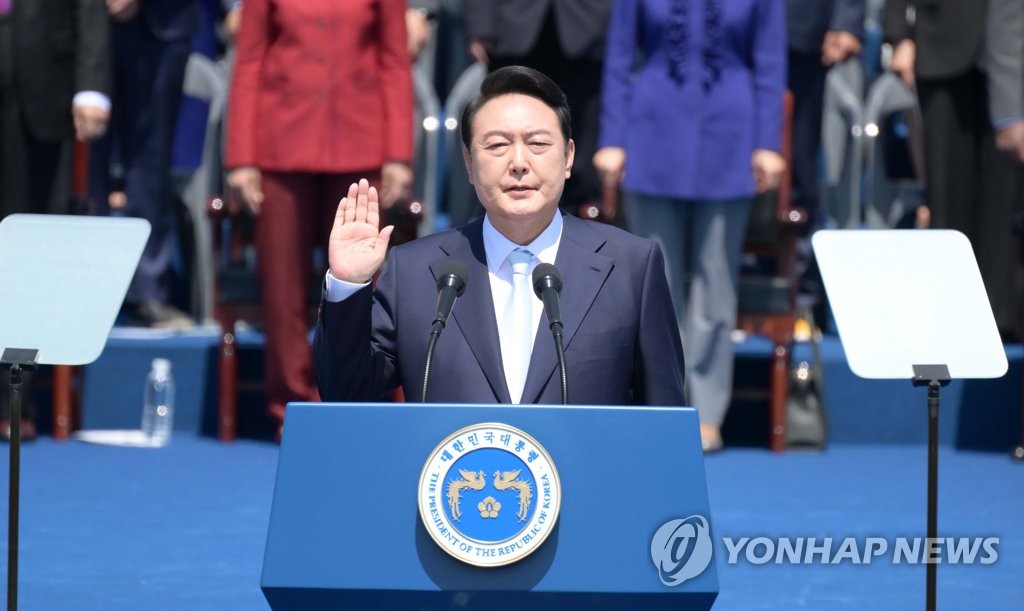 "I stand before you today, humbled by the trust and responsibility that you have given me and mindful of my solemn duty to rebuild this great nation."

Yoon technically began his five-year term at midnight in the underground bunker of the new presidential office building in Yongsan where he was briefed by the Joint Chiefs of Staff on North Korea's latest military movements and the South Korean military's readiness posture, according to his office.

"While North Korea's nuclear weapon programs are a threat not only to our security and that of Northeast Asia, the door to dialogue will remain open so that we can peacefully resolve this threat," Yoon said in his inaugural speech.

"If North Korea genuinely embarks on a process to complete denuclearization, we are prepared to work with the international community to present an audacious plan that will vastly strengthen North Korea's economy and improve the quality of life for its people," he said.

Yoon dedicated a large portion of his speech to underscoring the value of freedom -- a word he used 35 times -- and his commitment to working with other nations to overcome common challenges.

He also warned of the debilitating effects of internal division and conflict on South Korea's societal advancement and growth. 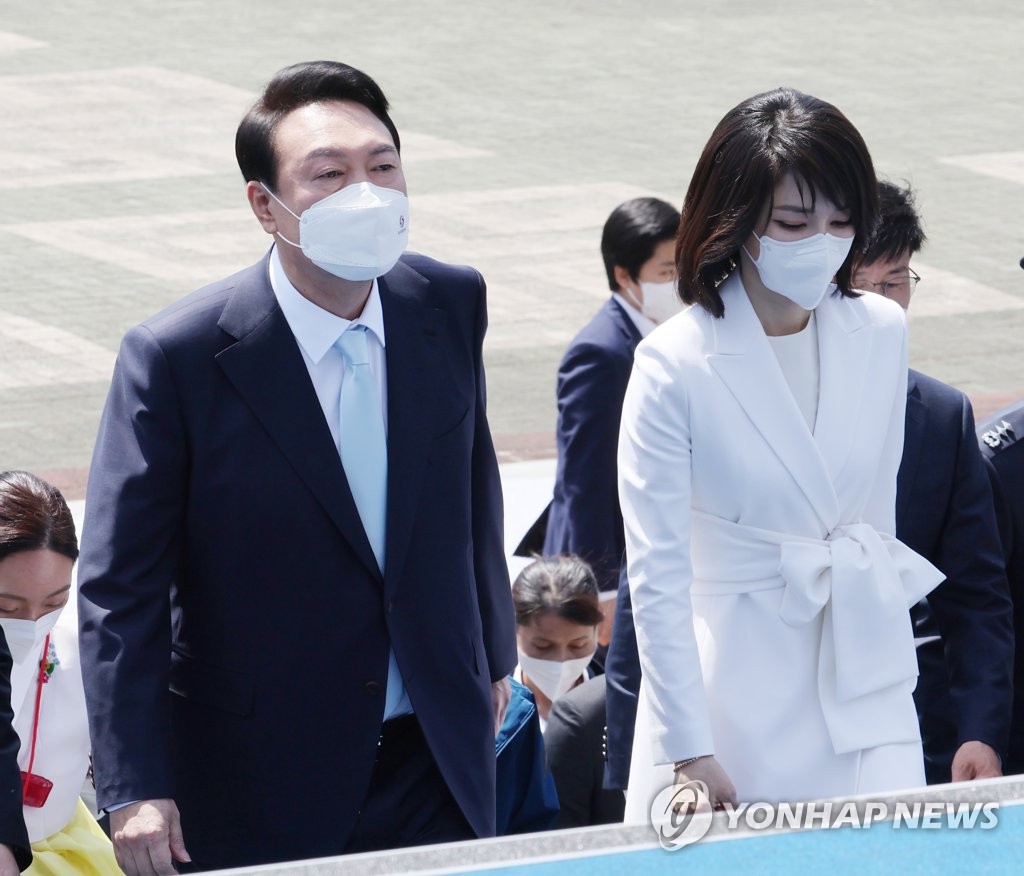 Yoon takes over at a time when the South Korean economy is struggling to deal with "three simultaneous highs" in inflation, interest rates and exchange rates.

On the security front, the threat of North Korea's nuclear and missile programs looms larger than ever, as the communist nation appears set to carry out its seventh nuclear test as early as this month.

Biden's visit, set for May 20-22, will come only 10 days after Yoon took office, and their planned meeting will mark the earliest-ever Korea-U.S. summit to take place following a South Korean president's inauguration.

Yoon headed straight to the new presidential office after the ceremony, waving to citizens while standing in his car and stopping briefly at a playground with first lady Kim Keon-hee to meet with children.

Yoon fought hard to set up the new office on the former defense ministry compound as a demonstration of his will to draw closer to the public.

Yoon regarded Cheong Wa Dae, the former presidential office built on a majestic compound at the foot of a mountain, as a "symbol of imperial power."

Emhoff handed him a letter from Biden that he said not only offered the U.S. president's congratulations but outlined his will to work closely with Yoon over the next five years.

Hayashi also gave Yoon a letter from Japanese Prime Minister Fumio Kishida, to which the president responded that he looks forward to working with Kishida to improve bilateral ties.

Later in the day, Yoon will attend inauguration celebrations at the National Assembly and host a dinner for local and foreign dignitaries at Hotel Shilla. 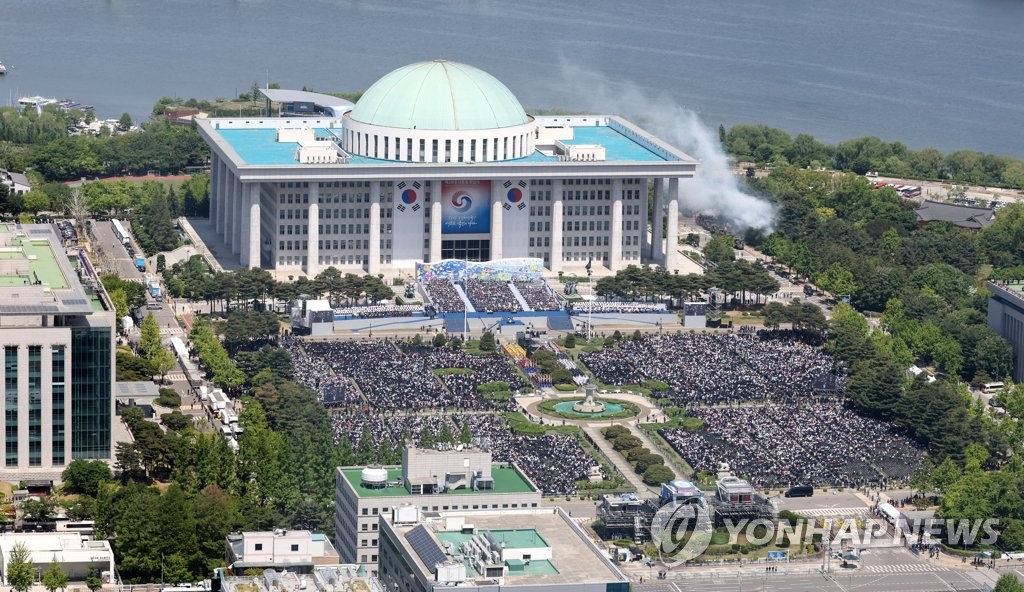 In his speech, Yoon called on the nation to take on greater responsibilities as the 10th largest economy in the world.

"It is incumbent upon us to take on a greater role befitting our stature as a global leader," he said. "We must take on an even greater role in expanding freedom and human rights not just for ourselves but also for others. The international community expects us to do so. We must answer that call."

One of the biggest challenges Yoon faces in foreign policy is repairing deeply fractured ties with Japan.

Meanwhile, the June 1 local elections are only weeks away, and the new government wants to avoid a scenario where Yoon's ruling People Power Party loses either the local elections or the seven parliamentary by-elections being held concurrently so early in its term. 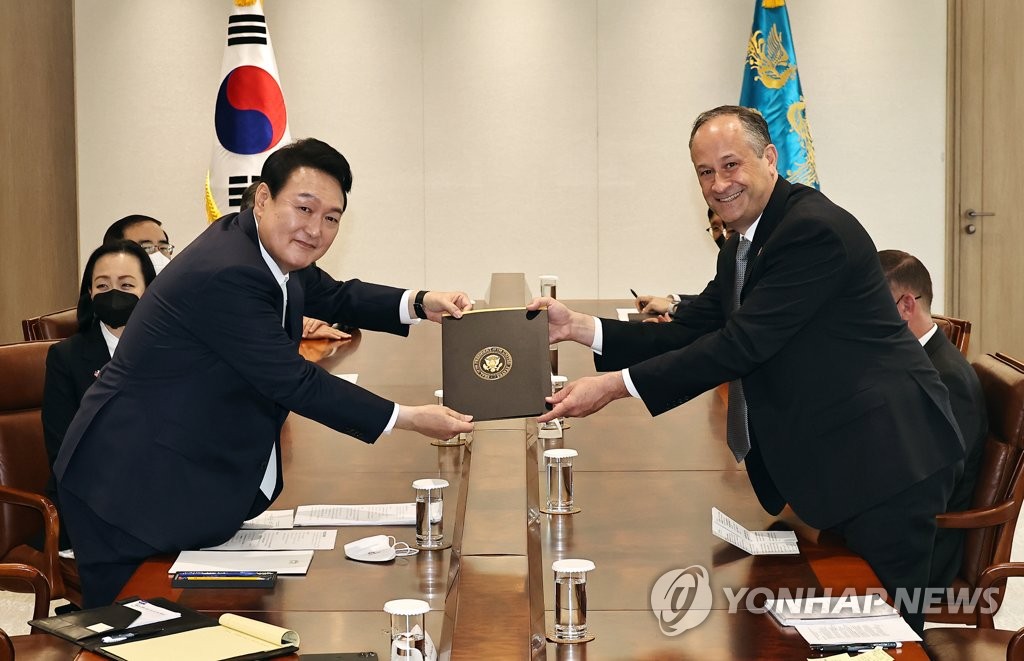 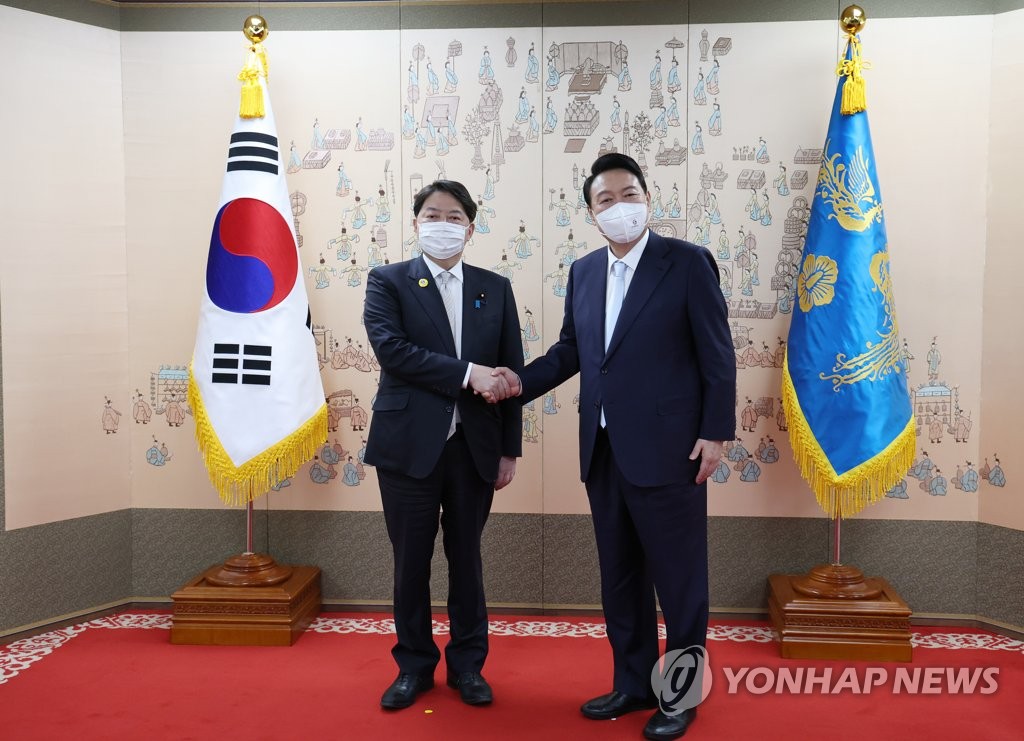