During the meeting, the two sides shared the view that the frayed ties between Seoul and Tokyo should be promptly mended and vowed to push for "speedy consultations" via diplomatic channels to deal with pending bilateral issues, according to the ministry. 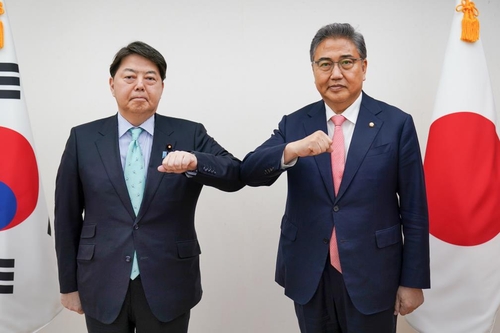 "The two sides agreed that strengthening close coordination between South Korea and Japan, as well as with the United States, is ever more essential under the changing situation on the Korean Peninsula and the international order," the foreign ministry said in a statement.

Park said the two nations need to inherit and develop the reconciliatory spirit of a 1998 declaration between then South Korean President Kim Dae-jung and then Japanese Prime Minister Keizo Obuchi.

Hayashi reiterated Tokyo's consistent stance on wartime issues that state-to-state promises should be kept, referring to a 1965 treaty to normalize bilateral relations and a 2015 accord on the so-called comfort women problem, he added.

Park called for joint efforts to reopen the air route between Gimpo International Airport in Seoul and Haneda Airport in Tokyo and resume a simplified visa procedure to promote people-to-people exchanges between the two nations.

Hayashi said he is looking forward to Park's upcoming visit to Japan at an early date to continue their discussions. His visit marks the first trip to South Korea by a Japanese Foreign Minister since June 2018.