SEOUL, May 10 (Yonhap) -- Nearly half of public institutions in South Korea lost money in 2021 amid the coronavirus pandemic with the state-run power monopoly logging the biggest loss on soaring oil prices, data showed Tuesday.

A total of 170 public companies and institutions, or 47 percent of 363 that disclosed their 2021 results, were in the red last year, according to the data posted on the state portal All Public Information in One (ALIO).

It was KEPCO's biggest operating loss ever and marked a sharp turnaround from a 4.1 trillion-won operating income in 2020 that stemmed from low oil costs.

In contrast, the Korea Land & Housing Corp., the state housing developer, recorded the biggest operating income of 5.6 trillion won last year on the back of the buoyant real estate market in Asia's fourth-largest economy.

The Korea Ocean Business Corp. came next with an operating profit of 4.9 trillion won, trailed by the Industrial Bank of Korea with 3.2 trillion won.

The National Health Insurance Service, the operator of state health insurance, posted an operating income of 2.2 trillion won year, up sharply from a 28 billion-won operating profit a year earlier and a loss of 4.3 trillion won in 2019. 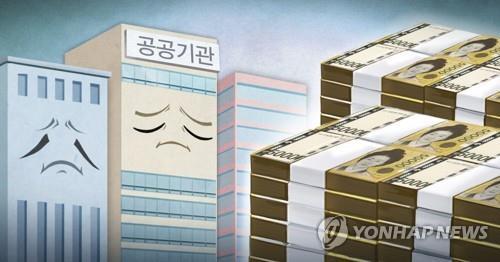 Nearly half of S. Korea's public firms lose money in 2021

Nearly half of S. Korea's public firms lose money in 2021