SEOUL, May 10 (Yonhap) -- Ian Pope has been a successful swimming coach for decades. The Australian knows a good swimmer when he sees one.

And he thinks he has a pretty good one on hand in the budding South Korean teenager Hwang Sun-woo.

Hwang, 18, and three of his freestyle relay teammates have been working with Pope in Melbourne since late April. The Korea Swimming Federation (KSF) set up a six-week training camp to help them prepare for next month's world championships and then the Asian Games in China in September. 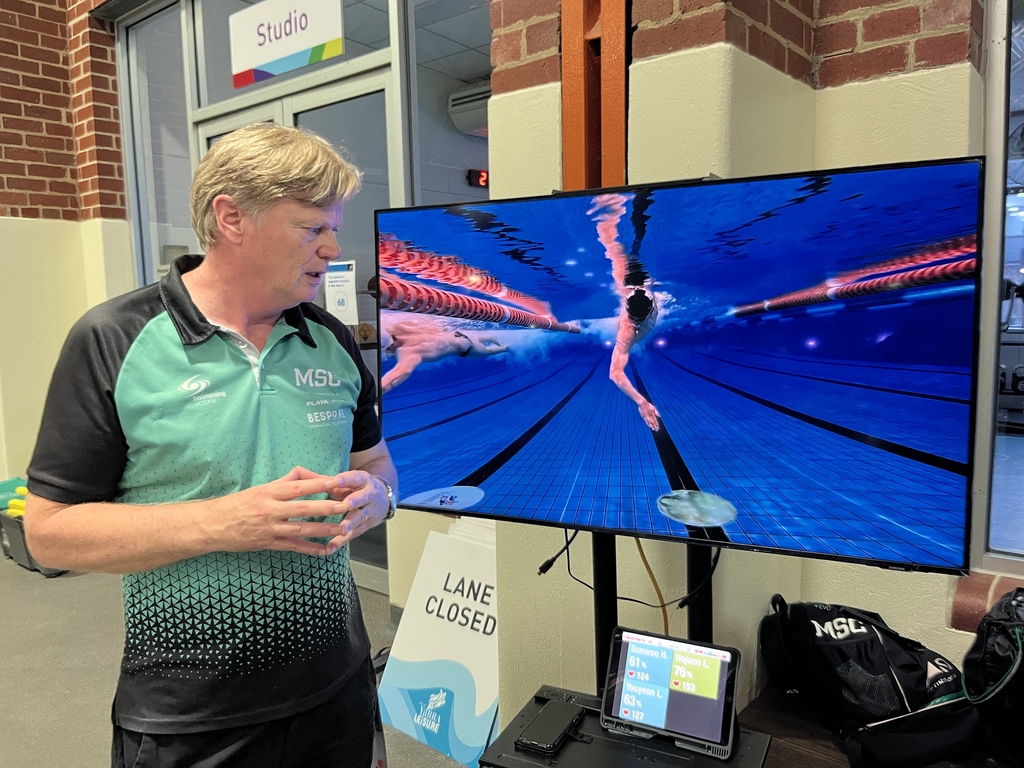 Hwang is being groomed as the next big thing in South Korean swimming, someone who has snatched the torch from the 2008 Olympic champion Park Tae-hwan. Hwang burst onto the scene at last year's Tokyo Olympics, where he set an Asian record in the 100-meter freestyle semifinals and pushed for a stunning medal before losing steam in the 200-meter freestyle final.

In December last year, Hwang won the 200m freestyle gold medal at the FINA World Short Course Swimming Championships, an event held in a 25m-long pool rather than the Olympic-sized 50m pool. He also won a FINA Swimming World Cup gold in the 200m free in October, also in a 25m pool.

With the Asian Games having been postponed, Hwang's focus is solely on the world championships. And in an online press conference arranged by the KSF on Tuesday, Pope said he expects some great things from Hwang in the future.

"I would like to say he has a beautiful technique. He has a nice feel for the water," Pope said from Melbourne. "That means he travels far with his technique and a very strong kick."

Pope said he and Hwang have been "focusing on small details in relation to the underwater kicking and the turns, starts ... all the finer details, which I think we can just improve a little bit." 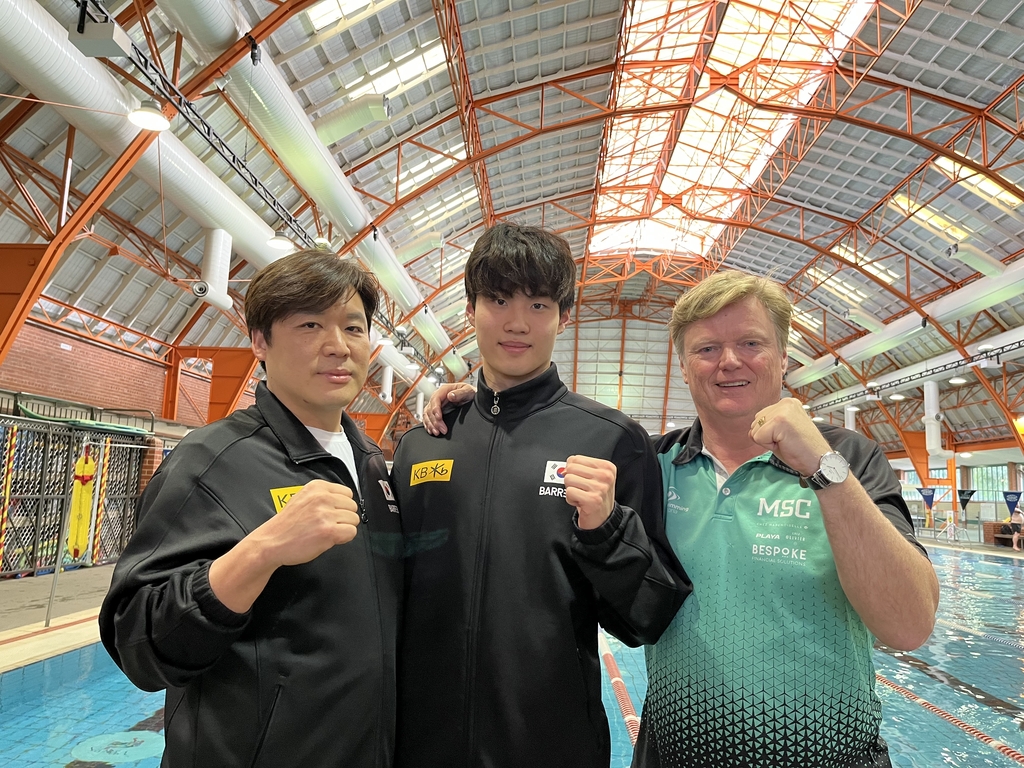 Pope coached Australia at the 2000 and 2008 Olympics, and was at the helm for six world championships. He has worked with several Olympic gold medalists and world champions, such as Grant Hackett and Michael Klim. His swimmers have set 11 world records.

Pope said Hwang is even more technically efficient than the two Australian greats.

"I actually think (Hwang) is a better swimmer. He is more relaxed," Pope said. "I felt that both Michael Klim and Grant Hackett worked very hard in the water. I think Hwang is probably the best technically in his freestyle. It's much easier, and he saves a lot more energy. So I'm very impressed with the way he swims."

"He does a similar stroke to Michael Phelps, and I like that loping type of stroke," Pope said. "I am a big fan of the way he swims. It's the sort of style that I would encourage to teach people that swim the 200 meters. It's very much a 200-meter technique."

As great as Hwang already may be, Pope said the South Korean teen has room for improvement in his speed. 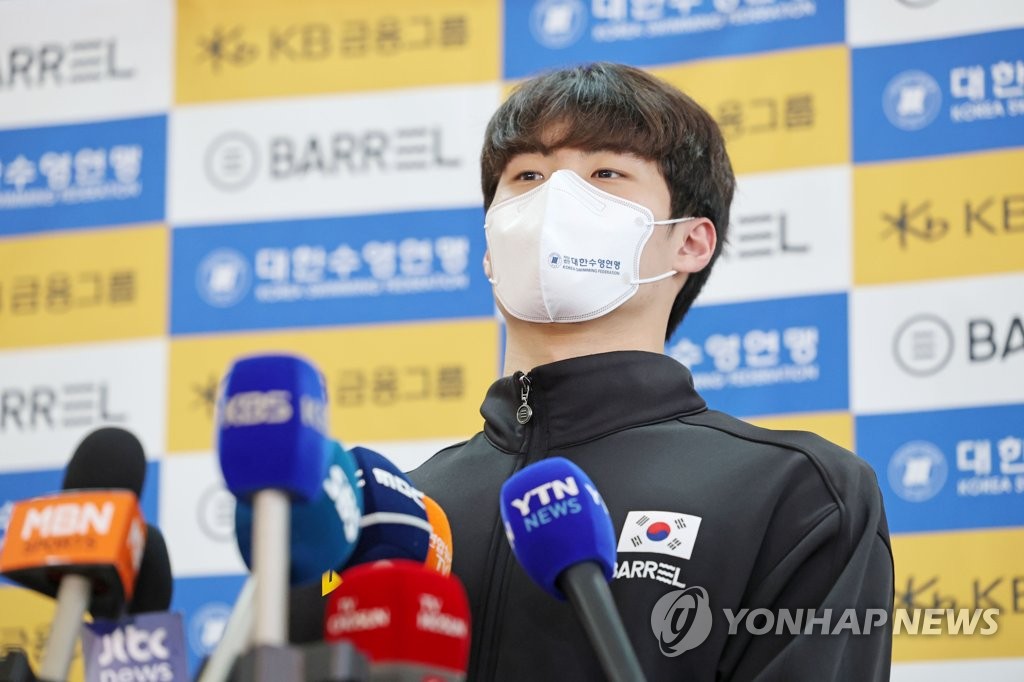 "Over a 50-meter race, (the fastest swimmers) can go one second faster than (Hwang). The actual world record time in the split in the 100 meters is 22.2. That's equal to his best-ever time," Pope said. "So I think we have to develop more speed, so he can be very fast at that first 50. He's very good at the back end, but he needs what I call the front speed of his swim race."

Pope declined to predict Hwang's results at the world championships in June, saying he doesn't know how other top-notch swimmers are preparing.

"All I can do is help him as much as we can," he added. "So whatever the outcome is, let's make sure he swims at his best."