SEOUL, May 11 (Yonhap) -- A top British official emphasized the need for the strict enforcement of international sanctions against North Korea and reaffirmed London's commitment to continued support for "a diplomatic solution" for peace on the peninsula.

Amanda Milling, minister of state for Asia and the Middle East, also described South Korea as a key partner in London's regional strategy and expressed hope for its proactive role in dealing with the Ukraine issue.

"Sanctions (on Pyongyang) must continue to be strictly enforced," she said during an interview with Yonhap News Agency at the British ambassador's official residence in Seoul on Tuesday.

She pointed out that the North's missile and nuclear programs pose a "real threat" to regional and global stability, and stressed that U.N. sanctions should remain in place until it takes concrete steps toward "complete, verifiable and irreversible denuclearization." 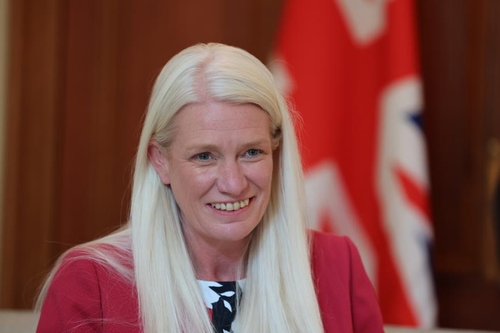 The North has continued to escalate tensions with a string of provocative acts, including ballistic missile launches and reported preparations for another nuclear test.

The U.N. Security Council is set to hold an emergency meeting in New York on Wednesday (local time) to discuss the problem. Britain is a veto-wielding member of the council. South Korea, though not a formal member, also plans to attend it as a country directly concerned over the issue.

"As a permanent member of the United Nations Security Council, we will continue to support the United States in efforts and work closely with our international partners for a diplomatic solution," she added.

Milling, a member of Parliament, was on a visit here as Britain's chief delegate to the inauguration of South Korean President Yoon Suk-yeol earlier Tuesday. She paid a courtesy call on Yoon and handed a book written by Prime Minister Boris Johnson, "The Churchill Factor," to him. She also had a meeting with Park Jin, Yoon's pick for foreign minister.

Among the major topics in the meetings was the ongoing war in Ukraine, with ways to add pressure on Russia and cooperate on post-war recovery efforts in Ukraine discussed, according to Milling.

South Korea has provided non-lethal aid to Ukraine, maintaining a cautious approach toward whether to join arms supplies.

"South Korea can go further in terms of supporting the international community in both condemning Russia but also the actions that we can take against (Vladimir) Putin's regime," she said, stressing the importance of "action." She stopped short of elaborating. 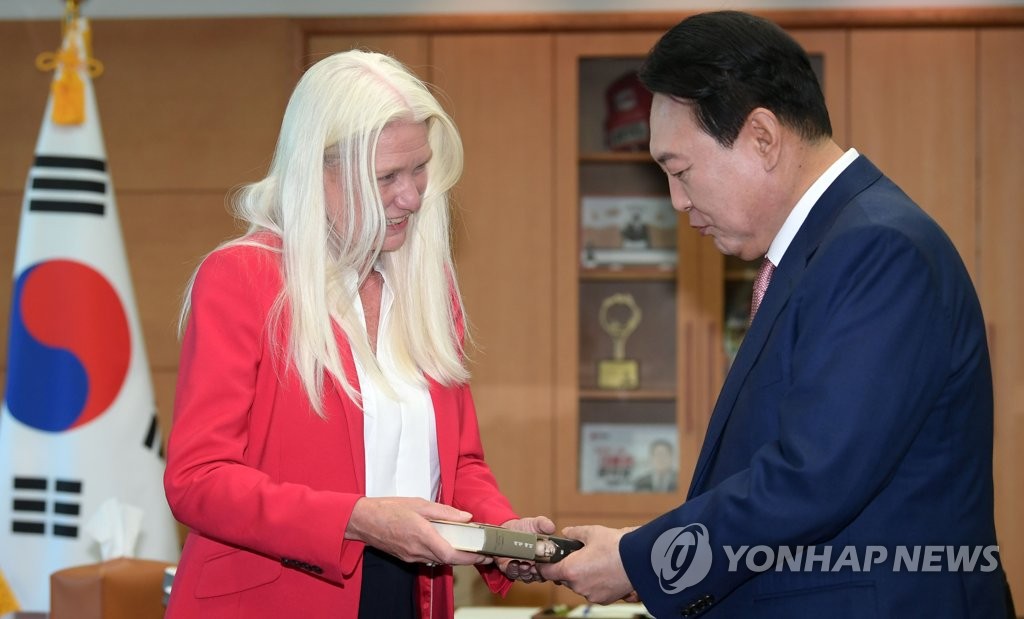 On the relationship between Seoul and London, she noted it has deepened in recent years and has the potential for further development.

Britain views South Korea as "a key partner" in its "tilt" toward the Indo-Pacific and has high expectations for the new government in terms of its pledge for Seoul to play a greater role in regional and global affairs.

"We really welcome President Yoon's foreign and national security blueprint, which is a new vision of the Asia-Pacific and his support and desire for a global order based on a kind of liberal democratic values," she said.

The minister also hoped for expanded bilateral cooperation in a wide range of fields, including trade, climate, technology and health, welcoming Seoul's "strong commitment and high ambition" regarding the issue of modifying their free trade agreement (FTA) that went into effect in January 2021.

The two sides could enhance the FTA via upcoming renegotiations in terms of emerging issues, including rules of origin and investment provisions, as well as digital, climate and SMEs, she said, adding, "We feel that we can go further."