In its latest report, Hanwha Investment & Securities Co. forecast the combined operating income of those firms listed on the main stock market to grow 9.6 percent on-year to 208 trillion won (US$163 billion) this year.

Hanwha Investment & Securities based its rosy outlook on major companies' strong performances for the January-March quarter.

Their first quarter sales were 3.6 percent higher than the market consensus, with operating income up 9.6 percent from the median estimate.

Those listed companies appear to have reduced their cost burdens at a higher rate than expected despite soaring oil and other raw materials costs, the brokerage house said.

The market consensus for KEPCO's 2022 operating loss has risen to 17.5 trillion won from 6.2 trillion won predicted at the start of the year as electricity rates remain frozen amid surging energy prices.

In the first quarter of the year, the state utility company shouldered the cost burden of major companies amid rising inflation that helped bolster their sales, Hanwha Investment & Securities pointed out. 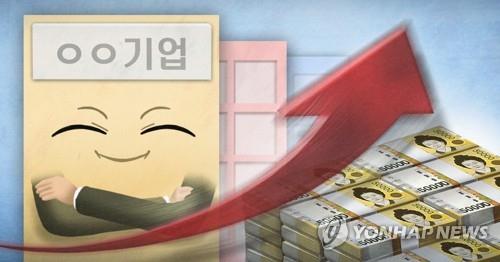