SEOUL, May 11 (Yonhap) -- The streets around the office of President Yoon Suk-yeol in the central Seoul district of Yongsan appear to be replacing the neighborhood of Cheong Wa Dae, the former presidential office and residence compound, as a new magnet for individual and group demonstrators.

On Wednesday, the second day of Yoon's presidency, civic and labor activists held a string of press conferences in front of the new presidential office compound, seeking to deliver various complaints and policy demands to the new leader. Nearly 10 one-person protesters also moved from near Cheong Wa Dae to Yongsan on the same day. 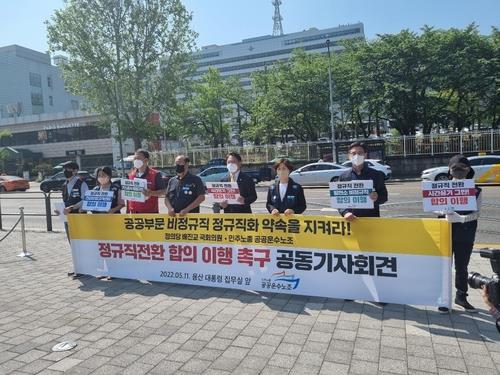 The flocking of group and individual demonstrators to Yongsan is expected to accelerate in the future, as a local court on Wednesday allowed protest marches within 100 meters of the new presidential office compound.

Throughout Wednesday, civic and social organizations held press conferences one after another in front of the main gate of the War Memorial of Korea located just across the street from the new presidential office.

The National Public Transport Workers' Union, an affiliate of the militant Korean Confederation of Trade Unions, and Rep. Bae Jin-kyo of the minor opposition Justice Party, held a joint news conference there to urge Yoon to accelerate the conversion of non-regular workers in the public sector to regular workers in accordance with an agreement signed with the preceding Moon Jae-in government.

They stressed that promises made in the name of the Korean government should be properly kept and implemented regardless of regime change.

Then, employees of Asiana KO, a subcontractor of Asiana Airlines Inc., met reporters on the same spot to demand the reinstatement of dismissed workers.

In the afternoon, a civic group from Chuncheon, 85 kilometers east of Seoul, held a press conference there to call for the business suspension of Legoland Korea, which recently opened in the Gangwon Province city, over three accidents and the punishment of those responsible. The Progressive Party held a news conference to demand the Yoon government change its policies on nuclear energy and power company privatization.

As many as eight one-person protesters, most of them relocating from a square next to Cheong Wa Dae, also secured their respective positions on the sidewalk in front of the war memorial's west gate from the early morning. They were holding pickets with various phrases appealing to the president. 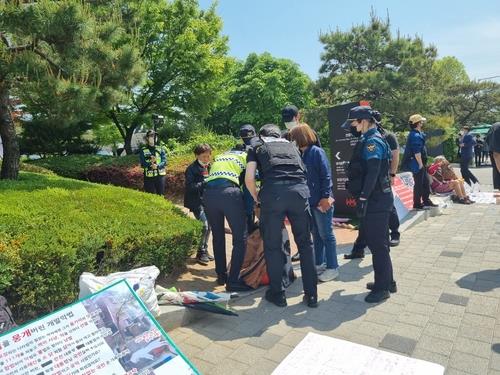 The atmosphere in the Yongsan district was generally calm, as police officers were intensively deployed on streets around the presidential office and stood in every alley leading to the office. But there were some disturbances.

A protester, who said he had staged a one-person demonstration in front of Cheong Wa Dae for the past five years over his damage caused by forced urban redevelopment, clashed with police while trying to set up a single-person tent on the sidewalk in front of the war memorial at around 11 a.m.

Police permitted only news conferences and one-person protests within 100 meters of the presidential office building after interpreting the current law as banning assemblies and demonstrations in the areas. Accordingly, the only rally in the Yongsan district on Wednesday was held near Samgakji Station, a subway station on Line 4 and Line 6 that is located outside the 100-meter radius.

But the landscape is likely to change a lot in the future, as the Seoul Administrative Court put the brakes on the police ban on assemblies and demonstrations within 100 meters of the presidential office in its ruling on a petition filed by activists opposed to discrimination against sexual minorities.

In its ruling, the court permitted marches within 100 meters of Yongsan's presidential office but banned marchers from staying in one place continuously in consideration of security and vehicle congestion concerns.

Individual and group protesters flock to presidential office in Yongsan

Individual and group protesters flock to presidential office in Yongsan