The No. 2 mobile app market operator here, after Google Play store, received lackluster response from institutional investors during a two-day demand forecasting session until Tuesday, according to the sources. Institutional bids reportedly mostly fell below the company's desired pricing band between 34,300 won ($27) and 41,700 won.

"Just this morning, ONE store considered going public by lowering the desired price, but they apparently decided to scrap the plan after concluding the company's value may not be properly recognized by the market under the current stock market situation," a source said.

Lee Jae-hwan, CEO of ONE store, said in a press conference on Monday that the company was determined to get listed on the main bourse as planned this month, undeterred by the sister company's derailed attempt.

ONE store is the latest among several South Korean companies that have backpedaled on IPO plans so far this year. In late January, Hyundai Engineering Co., the construction arm of Hyundai Motor Group, withdrew its plan to get its stocks listed on the country's main bourse due to adverse market conditions.

ONE store logged 214 billion won in sales last year and an operating loss of 5.8 billion won. The company racked up 1.13 trillion won worth of transactions on its platform last year.

Its market share in the local mobile app market stands at some 14 percent, with Google Play's presence coming in at 71.9 percent. 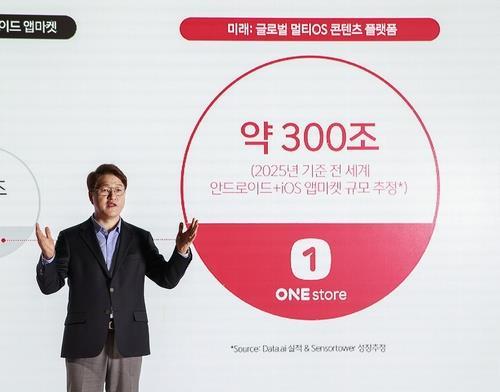