SEOUL, May 11 (Yonhap) -- President Yoon Suk-yeol said Wednesday that South Korea will take steps to reopen an air route between Seoul's Gimpo and Tokyo's Haneda airports this month so as to bolster exchanges between the two countries.

Yoon made the remark during a meeting with a Japanese parliamentary delegation visiting him on his second day in office, stressing that restoring frayed relations between the two countries will serve the interests of both sides.

He said the government plans to set up antivirus measures at Seoul's Gimpo International Airport to test all travelers before reopening the route to Tokyo's Haneda Airport.

"If Japan can exempt them so that they can immediately do business in Japan, I expect the restoration of the Gimpo-Haneda route can lead to active exchanges between our two peoples," Yoon told the delegation who came to Seoul to attend his inauguration ceremony the previous day.

Yoon expressed hope that the two sides will open a new frontier in their relationship in the spirit of a 1998 joint declaration by then South Korean President Kim Dae-jung and then Japanese Prime Minister Keizo Obuchi.

"South Korea and Japan are the closest neighbors and key cooperation partners that share liberal democratic values and a market economy," Yoon said. "Restoring and improving stagnant South Korea-Japan relations at an early date is in both countries' common interest."

Relations between the two countries have deteriorated to their worst level in years amid ongoing disputes over wartime sex slaves, forced labor and other issues stemming from Japan's 1910-45 colonial rule of the Korean Peninsula.

Fukushiro Nukaga, a lawmaker of Japan's Liberal Democratic Party and chairman of the Japan-Korea Parliamentarians' Union, said he met with Japanese Prime Minister Fumio Kishida before departing for Seoul, and that Kishida had three things to say.

The first was that the most important thing is to improve bilateral relations based on the friendly cooperative relationship that was formed following the normalization of ties in 1965. 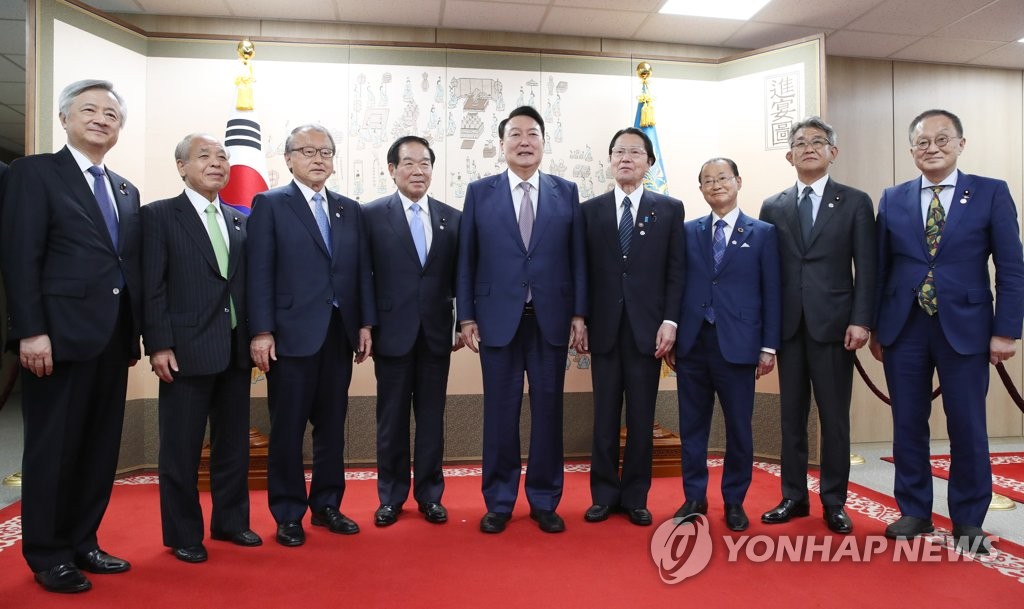