Ned Price also reiterated that the U.S. and its allies, including South Korea, only seek to denuclearize the Korean Peninsula through peaceful dialogue. 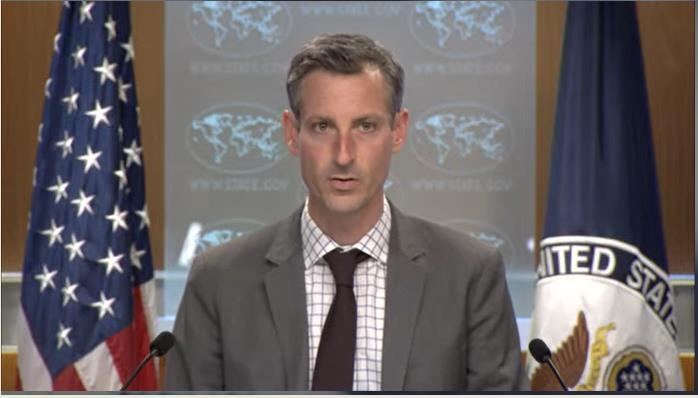 "We have made very clear that we are willing to engage in good faith diplomacy with the DPRK. We do so, of course, with no hostile intent," the department press secretary told a daily press briefing, referring to North Korea by its official name, the Democratic People's Republic of Korea.

"Our only intent is to see the complete denuclearization of the Korean Peninsula in the interests of peace and security in the Indo-Pacific and beyond. So that's something we'll continue to discuss with our South Korean allies," he added.

His remarks come after North Korea staged more than a dozen rounds of missile launches this year.

The state department has also said the North may be preparing to conduct a nuclear test as early as this month, which would mark its seventh nuclear test if conducted.

"When it comes to challenges, there is no more pressing challenge than that posed by the DPRK's WMD programs -- its nuclear weapons, its ballistic missile programs," said Price. " We will, as I said, coordinate closely to address the threats that they pose."

Biden will also visit Tokyo next Sunday to hold talks with Japanese Prime Minister Fumio Kishida and also take part in a Quad meeting with leaders from Australia, India and Japan.