WASHINGTON, May 11 (Yonhap) -- The U.N. Security Council (UNSC) convened an emergency meeting Wednesday to discuss North Korea's recent missile provocations but failed to produce a tangible outcome due to opposition from China and Russia.

The special session of the 15-member council came at the request of the U.S., which condemned North Korea's recent missile tests as "a blatant violation of multiple Security Council resolutions."

"Let's be clear. The DPRK is not undertaking its activities defensively in response to threatening behavior. This is self-initiated, unprovoked campaign of ballistic missile launches that threatens its neighbors and attempts to undermine this council," U.S. Ambassador to the U.N. Linda Thomas-Greenfield said in the session, also attended by the representatives of South Korea and Japan. 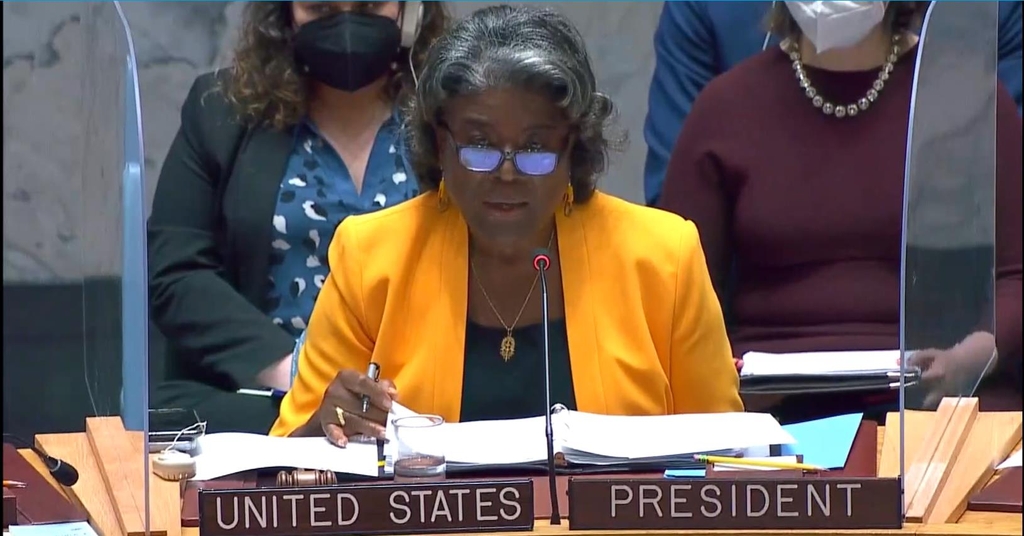 The top U.S. representative to the U.N. said her country remains committed to engagement with North Korea, but insisted the UNSC needs to take action to prevent further provocations by Pyongyang.

"We hope the DPRK will accept our repeated offers of dialogue. We have also asked those who regularly speak with the DPRK encourage them to engage in diplomacy. In the meantime, we have a responsibility to respond to the DPRK's unlawful behavior," she added.

Many others joined the U.S. in urging North Korea to end its provocations and return to dialogue.

"There can only be a diplomatic and peaceful resolution to the issues on the Korean Peninsula. The DPRK must understand that and take up, in good faith, offers of dialogue by the United States and the Republic of Korea without preconditions," the U.N. representative from Ireland said, referring to South Korea by its official name.

Britain's representative to the U.N. called on the North to refrain from further provocations and "engage meaningfully in dialogue with the United States and to take concrete steps towards denuclearization in a complete, verifiable and irreversible manner."

Representatives from China and Russia, on the other hand, blamed the U.S. for not reciprocating what they called denuclearization steps the North has taken, referring to North Korea's dismantlement of its Punggye-ri nuclear site in 2018.

"Regrettably, the U.S. side later (changed) its position and did not reciprocate the DPRK's positive initiatives in accordance with the action for action principle. leading to an intractable impasse in DPRK-U.S. dialogue, adding to the mutual distrust between the two countries and stalling the denuclearization process on the peninsula," the Chinese envoy to the U.N. said through an interpreter.

Russia's envoy agreed, saying, "Unfortunately, so far, the council has only tightened restrictions, ignoring the positive signals from North Korea," also through an interpreter.

Thomas-Greenfield said two UNSC members, apparently China and Russia, have blocked every attempt to enforce or update sanctions on North Korea over the past four years, "enabling the DPRK's unlawful action."

"The DPRK sees that this council used to respond with meaningful consequences, but it no longer does. So it interprets council silence to mean that it won't face future consequences and it sees our silence as permission to continue on its stated trajectory," she said.

The U.S. representative earlier said the U.S. will seek to put a U.S.-drafted resolution on North Korea to a vote before the U.S.' monthlong presidency of the UNSC ends on May 31.