Yoon had needed at least three more ministers to meet the quorum for his first Cabinet meeting that took place in the afternoon, which led to speculation he would go ahead with the appointments without approval from the National Assembly. 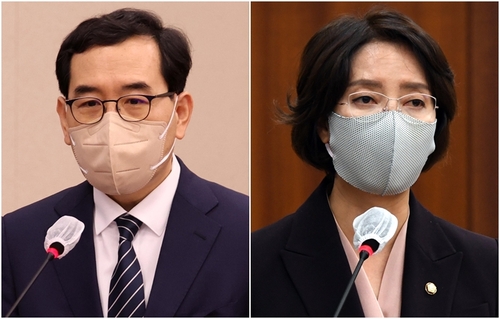 "(The appointments of) Ministers Park Jin and Lee Sang-min have been approved," the official told reporters.

Earlier in the day, the National Assembly adopted confirmation hearing reports for the SME and industry minister nominees, raising the number of minister nominees it has approved to nine out of 19.

The main opposition Democratic Party has yet to endorse Prime Minister nominee Han Duck-soo and nine others.

Park's appointment was considered especially pressing, as U.S. President Joe Biden is set to make his first trip to Seoul since taking office next week and hold his first summit with Yoon on May 21.

Park is a lawmaker of the ruling People Power Party, and Lee is a former vice chief of the Anti-Corruption and Civil Rights Commission.

Thursday's Cabinet meeting will be an extraordinary session held to pass the government's extra budget proposal aimed at compensating small business owners for their losses from COVID-19 business restrictions.

Under an enforcement ordinance, a Cabinet meeting requires the majority of its members -- currently 11 out of 20 -- to be present.