WASHINGTON, June 15 (Yonhap) -- The United States and South Korea must send a clear and strong message to North Korea that the complete denuclearization of the Korean Peninsula is their goal in order to succeed, a group of South Korean and U.S. experts said in a book soon to be released.

The experts also underscored the importance of maintaining pressure on Pyongyang while helping to address humanitarian issues, such as the recent outbreak of the COVID-19 pandemic in the impoverished country.

"First, the two sides should continue to affirm to North Korea (and to China) that complete, verifiable, irreversible denuclearization (CVID) remains the goal on the Korean Peninsula," Victor Cha wrote, according to a copy of the book obtained by Yonhap News Agency.

"Despite the advanced state of North Korea's nuclear program, giving up on denuclearization as a long-term aim is not a viable option, as it would both undermine the global non proliferation regime and create incentives for neighboring countries to initiate their own nuclear weapons programs, thereby seriously undermining regional stability," added Cha.

Cha is a senior vice president and Korea chair at the Washington-based Center for Strategic and International Studies think tank. He is one of some 20 experts from South Korea and the U.S. who offered policy recommendations for U.S. President Joe Biden and South Korean President Yoon Suk-yeol in the book, titled, "Two Presidents, One Agenda," which is set to be published by the Wilson Center on Monday.

Yoon and Biden are set to hold a summit in Seoul this week when the U.S. president embarks on a five-day trip to South Korea and Japan. 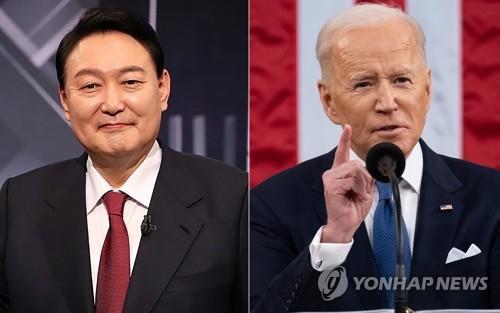 Park Won-gon, a professor from Seoul's Ewha Womans University, argued the countries should reaffirm that their goal is the complete denuclearization of North Korea, as opposed to the Korean Peninsula.

"North Korea defined the denuclearization of the Korean Peninsula in December 2018 as 'a complete elimination of the U.S. nuclear threat to Joseon before eliminating our nuclear deterrence'," wrote Park, adding, "This calls for the U.S. to first withdraw its extended deterrence from South Korea."

Park also highlighted the need for the allies to continue enhancing their joint deterrence.

"The denuclearization of North Korea would be very difficult to achieve in a short period of time. Therefore, South Korea and the U.S. should first expand their ability to respond to North Korean nuclear weapons," wrote Park.

The sentiment was echoed by Cha, who insisted "the two allies should never sacrifice alliance equities," such as joint military exercises, "for the sake of incremental progress in denuclearization negotiations."

To this end, Cha underscored the importance of transparency between Seoul and Washington, saying, " As tempting as it may be to engage in secret negotiations with Pyongyang, there should be no surprises in the alliance."

He also highlighted the need for the allies to offer sanctions reliefs to North Korea only when they are warranted.

"The two allies must agree to: 1) be stingy with these sources of leverage in exchange for only reversible steps by North Korea; and 2) be generous with major sanctions relief in return for irreversible denuclearization steps," said Cha.

"The United States should support North-South engagement efforts, particularly in humanitarian areas, with the understanding that these policies will be closely coordinated with denuclearization negotiations and will remain compliant with the UN sanctions regime," he said.

As of Sunday (Seoul time), the country had reported some 1.21 million patients with fever and 50 deaths.