The Sikorsky S-61N went down near the summit of Mt. Seonja at around 8:40 a.m. while circling the area to transport building materials for renovation work on a mountain trail.

All three crewmen aboard the chopper -- the pilot and the co-pilot in their 60s, and a mechanic in his 30s -- were rescued with serious injuries and rushed to a hospital.

The pilot was unconscious and wasn't breathing when he was rescued, while the other two suffered back and head injuries, respectively, according to the officials.

The South Gyeongsang provincial government was using the helicopter for firefighting purposes on loan from a private freight company. It had flown out to Geoje earlier in the day at the request of the city government, according to officials. 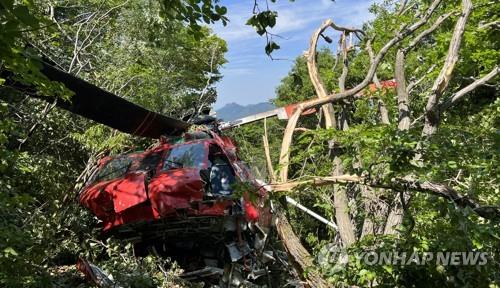