SEOUL, May 16 (Yonhap) -- South Korea's car exports grew 12.4 percent in April from the previous year on the back of global popularity of eco-friendly cars, data showed Monday.

Outbound shipments of automobiles stood at 196,780 units last month, compared with 175,015 units a year earlier, according to the data from the Ministry of Trade, Industry and Energy.

Car exports rebounded in April, one month after falling for the first time in five months due to a tight global supply of automotive chips and the delayed distribution of car parts across the globe amid the COVID-19 pandemic.

Eco-friendly cars accounted for 25.3 percent of the country's total car exports, according to the ministry.

At home, both domestic production of and demand for automobiles logged an on-year fall in April.

The country produced 306,462 units of cars last month, down 5.3 percent from the same month a year earlier, as China's lockdown of major cities to curb the pandemic had disrupted supplies of parts, according to the ministry.

Domestic sales of vehicles also fell 11.1 percent from a year earlier to come to 143,167 units in April due mainly to a higher base effect and the delay in deliveries. 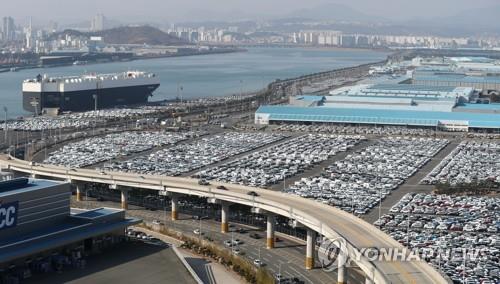 Auto exports up 12.4 pct in April on popularity of eco-friendly cars

Auto exports up 12.4 pct in April on popularity of eco-friendly cars