"Over the past five years, housing prices have skyrocketed, and the gap in assets of households has widened. Real estate now became a social status. I will abolish this modern-time status system by stabilizing the market for middle-class, ordinary people," Won said in his inauguration speech.

The ministry will announce supply plans within the first 100 days of the launch of the new government. The plans will detail the volumes by region, type and the time frame, as well as the ways of providing them in a swift manner, according to the minister.

The focus will be on how to extend supplies in the high-demand, metropolitan areas, and "exceptional" financial and other supportive measures will follow to help young people have their own homes, he added.

The administration of President Yoon Suk-yeol, who took office last week, has vowed to drastically reform real estate policies, and key pledges include the construction of more than 2.5 million new homes nationwide during his five-year term and easing taxes imposed on multiple home owners to persuade them to sell their homes.

Won also vowed to push for housing reconstruction and redevelopment projects in line with market principles, and relax financial and other regulations in the real estate market.

Home prices have soared over the past several years despite a set of measures, such as tax hikes and tighter lending rules, to rein in the prices. Critics say the previous administration only pursued demand constraints, and punitive taxes and other market-unfriendly measures that disturbed the market.

The ceremony was broadcast live via Youtube, during which the new minister had a Q&A session in an effort to better communicate with people, according to his office. 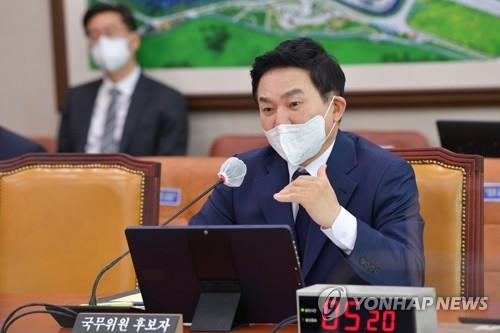