SEOUL, May 16 (Yonhap) -- A key suspect in a land development corruption scandal in Seongnam, just south of Seoul, has been additionally indicted for embezzlement, prosecution officials said Monday.

Kim Man-bae, owner of Hwacheon Daeyu Asset Management, who is now standing trial on breach of trust and bribery charges related to the 2015 project to develop Seongnam's Daejang-dong district into apartment complexes, has been additionally indicted by the Seoul Central District Prosecutors Office for embezzling 10 billion won (US$7.8 million) from his company, the officials said. 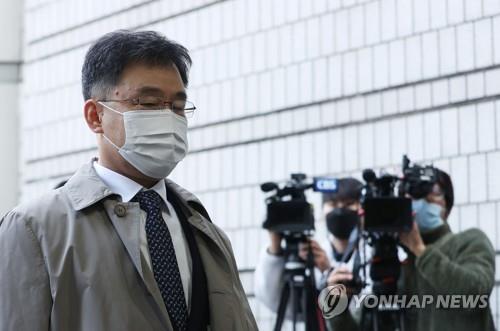 The so-called Daejang-dong scandal, in which Hwacheon Daeyu and a small number of unheard-of private partners were allowed to reap astronomical investment profits, has drawn keen media attention because the project was launched when former Democratic Party presidential candidate Lee Jae-myung was mayor of Seongnam.

Kim, a former journalist, is accused of personally spending 10 billion won out of 47.3 billion won that Hwacheon Daeyu lent to Cheonhwadongin No. 1, another partner in the Daejang-dong project, and delivering the money to a businessman, surnamed Lee, who was in charge of selling newly built apartments from 2014 to 2015. Lee then gave all or part of the money to a civil construction company that had unsuccessfully lobbied for some civil business rights in the Daejang-dong district.

Lee, the businessman, is said to be a distant relative of former special counsel Park Young-soo who investigated a corruption scandal involving former President Park Geun-hye in 2017.

But Kim's lawyers denied the embezzlement charges, arguing that the 10 billion won was spent through approval by Hwacheon Daeyu's board of directors and legitimate accounting procedures.