DAEGU, May 17 (Yonhap) -- Lee Yong-soo, a South Korean victim of Japan's wartime military sexual slavery, has called on President Yoon Suk-yeol to resolve the historical dispute promptly, as time is running out for the few remaining survivors of the wartime brutalities.

Yoon, who took office on May 10, has vowed to restore relations with Japan that have soured in recent years due to issues stemming from Japan's forced mobilization of Koreans into hard labor and military brothels during World War II.

"The elderly victims of the military sexual slavery are now all over 90 years old. I ask President Yoon to grant the wishes of the few remaining grandmothers by resolving the issue," Lee said during an interview with a group of reporters in the southeastern city of Daegu on Monday. 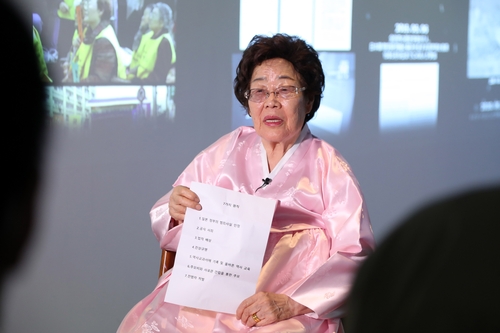 "For any real resolution of the issue, President Yoon should realize the seven principles," she said.

"None of them have been met, so we are pushing for the referral of the case to the United Nations Committee against Torture to reveal Japan's wrongdoing."

Lee and colleagues have campaigned to bring the issue to the U.N. International Court of Justice in the Hague.

As Japan refuses to refer the case to the ICJ, the activists are urging Seoul to push for arbitration proceedings with the U.N. panel that monitors implementation of the U.N. Convention against Torture and Other Cruel, Inhuman or Degrading Treatment or Punishment.

Historians estimate up to 200,000 women, most of whom were Korean, were forced to work in Japanese military brothels during World War II. Japan occupied the Korean Peninsula from 1910 to 1945.

There are only 11 registered victims of the sexual slavery alive in South Korea, after Kim Yang-joo, 98, died May 1.

Regarding Yoon's initiative to bring the relations between the two neighbors back on track, she said Japan's apology should precede any improvement in ties.

"There should be no change to the principle of no improvement in South Korea-Japan relations without Japan's official apology. (The two countries) should resolve the problem promptly and discuss improving ties," she said.
(END)