SEOUL, May 18 (Yonhap) -- President Yoon Suk-yeol vowed Wednesday to firmly uphold the spirit of a 1980 pro-democracy uprising in the southwestern city of Gwangju, saying freedom, human rights and liberal democracy were the values the revolt sought to defend with blood.

Yoon made the remark during a ceremony marking the 42nd anniversary of the Gwangju Democratization Movement after traveling by high-speed KTX train to Gwangju, some 330 km southeast of Seoul, together with nearly all lawmakers of the ruling People Power Party in an effort to promote national unity.

"We remember the resistance of May, which 42 years ago defended the values of a liberal democracy and human rights with blood," Yoon said during the ceremony held at the May 18th National Cemetery. 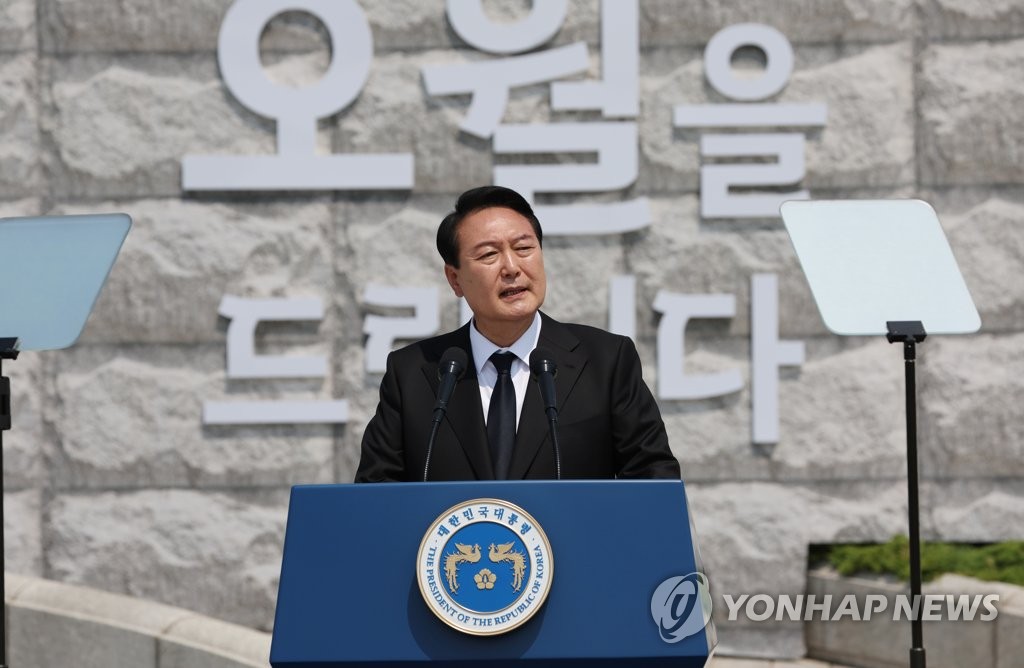 "The May spirit is a restoration of universal values and nothing less than the liberal democratic spirit of the Constitution," he said.

Yoon said the spirit of the uprising lives on and demands the current generation stand up against all illegal acts that threaten freedom and human rights.

Prosperity for future generations and the country begins with inheriting the spirit of the uprising in a responsible manner, he added.

Yoon promised to develop the economy of Gwangju and the surrounding Honam region by investing in artificial intelligence and other advanced technology industries.

"The new government and I will do our best to develop the values defended by the souls of democracy to put (Gwangju and Honam) on a path to prosperity," he said. "I will firmly defend the May spirit. I promise to open a great future for Gwangju together with you."

Yoon's visit to Gwangju was seen as an act of reaching out to the home turf of the liberal main opposition Democratic Party amid perceptions his conservative party has ties to the former authoritarian regime of Chun Doo-hwan.

Chun ordered a crackdown on the uprising, and left more than 200 dead and 1,800 others wounded, according to conservative official data.

"The values of a liberal democracy and human rights are a philosophy of unity that binds our people together," Yoon said. "That is why the May spirit that defended our liberal democracy in blood is the cornerstone for national unity."