SEOUL, May 18 (Yonhap) -- Someone apparently forgot to tell Park Byung-ho this isn't 2015 anymore.

Park, the veteran slugger for the KT Wiz, leads the Korea Baseball Organization (KBO) in home runs this year with 13 after 37 games, his latest bomb coming Tuesday night. Park is five ahead of Han Dong-hui of the Lotte Giants and Kim Hyun-soo of the LG Twins. 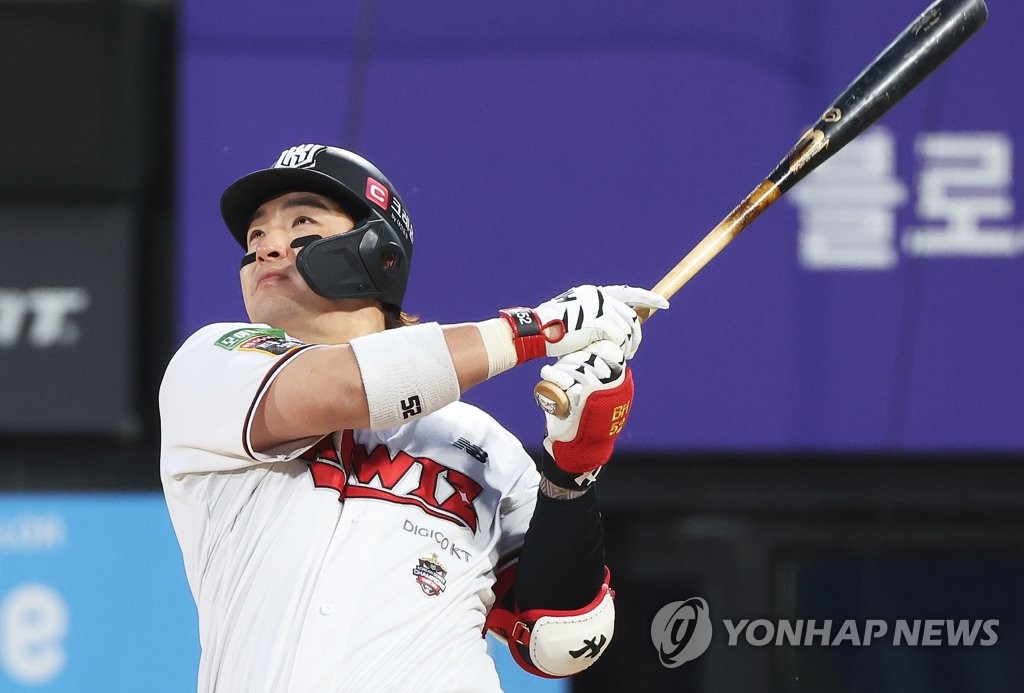 All of this is from someone who turns 36 in two months and who many pundits felt was washed up two years ago.

By 2020, some of Park's earlier, video game-like numbers had become a distant memory. Hampered by injuries, Park was limited to just 93 games and hit .223 with 21 home runs, his lowest total in a full season as a Hero since joining the team in a trade from the LG Twins during the 2011 season.

In 2021, Park finished dead last among all qualified hitters with a .227 batting average, while his slugging percentage plummeted to .323. He did hit 20 homers for his eighth consecutive season with at least that many, but the Heroes had already lost so much faith in their franchise star that they let him walk via free agency after the season.

The Wiz, according to Park, were the only team to even offer him a contract in the open market. They inked him to a three-year, 3 billion-won (US$2.4 million) contract in December, a deal that at the time appeared to be a bad investment but now has a great chance to be the best bargain in the league. 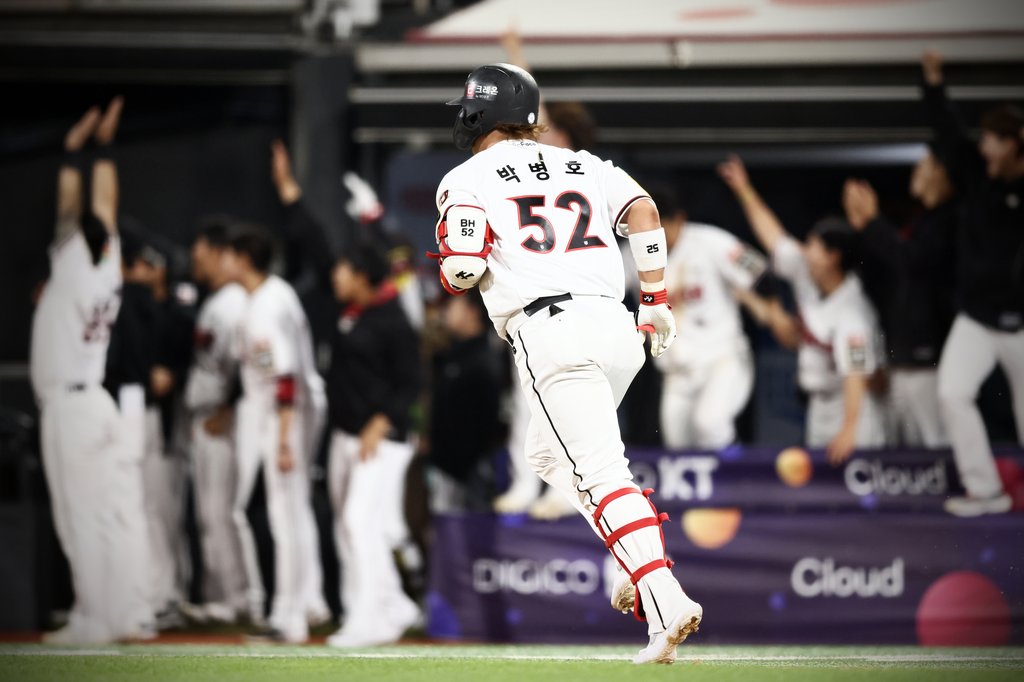 Park's 13th homer came Tuesday against a reliever who almost never gives up a long ball.

With the Wiz trailing the twins 2-0 in the bottom of the eighth inning at KT Wiz Park in Suwon, some 45 kilometers south of Seoul, Park stepped in against hard-throwing sidearmer Jung Woo-young.

Prior to Tuesday, Jung had surrendered only six home runs in 223 2/3 career innings. He didn't allow any in 65 innings last year.

And behind the count at 0-2, Park flashed opposite field power, sending a sharp two-seam fastball on the outside corner over the right field wall for a game-tying shot.

It wasn't a mistake pitch by Jung. Park was able to extend his arms and timed his swing perfectly to get all of the ball.

"I knew Jung Woo-young had been throwing his two-seamers quite a bit lately," said Park, who had whiffed on and then fouled off a couple of two-seamers earlier in the at-bat. "So I tried to be quicker with my swing and it worked out great with the home run." 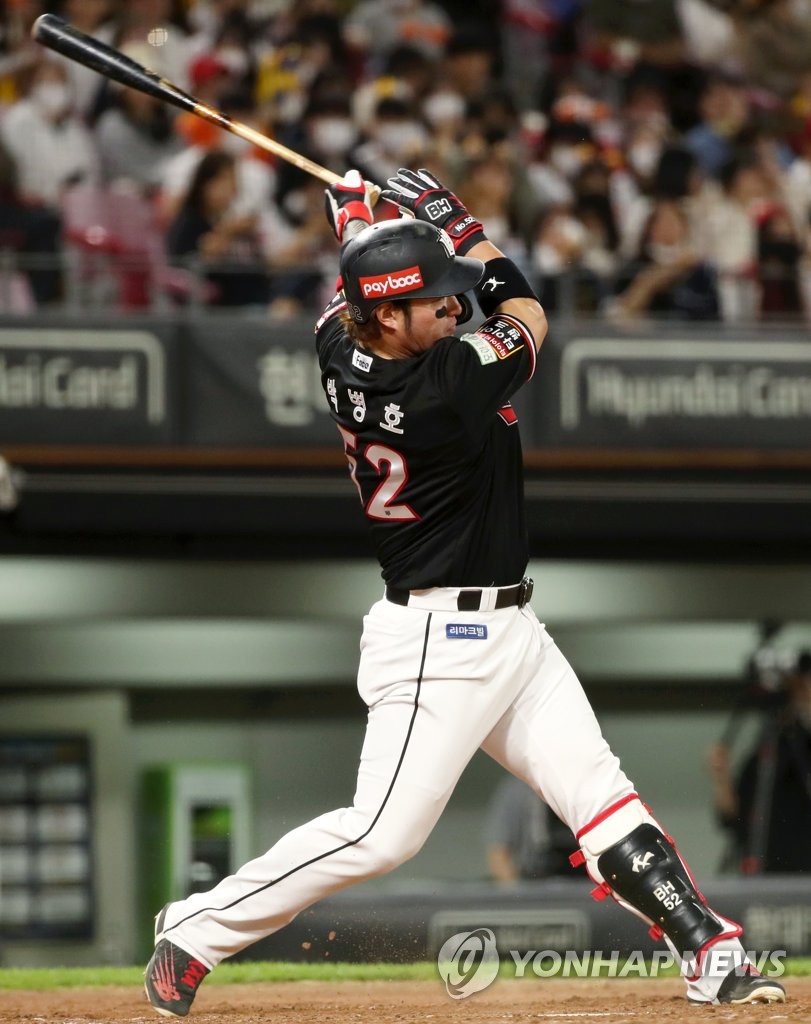 It was a vintage Park swing, taking fans back to the mid-2010s when he would almost casually homer to right field and leave opponents and teammates alike stunned.

With so much more baseball to play this year, it's perhaps unrealistic to expect Park to keep his current pace and reach the half-century mark again. But Park has a strong shot at claiming his sixth career home run crown after doing so from 2012 to 2015 and again in 2019.

Lee Jong-yeol, a color commentator for the cable station SBS Sports who called Tuesday's Twins-Wiz game, said Park has seemed much more comfortable in the box this year than in the recent past.

"I think he has been able to get his timing down on different pitches much better this year," Lee said. "His swing is quicker and more precise. And he is as strong as ever."

Park has been carrying the offensive load for the banged-up Wiz, currently without two hitters who were supposed to surround Park in the heart of the lineup. First baseman Kang Baek-ho and outfielder Henry Ramos are both out with broken toes. KT manager Lee Kang-chul said Tuesday he expects both players to return in about three weeks. 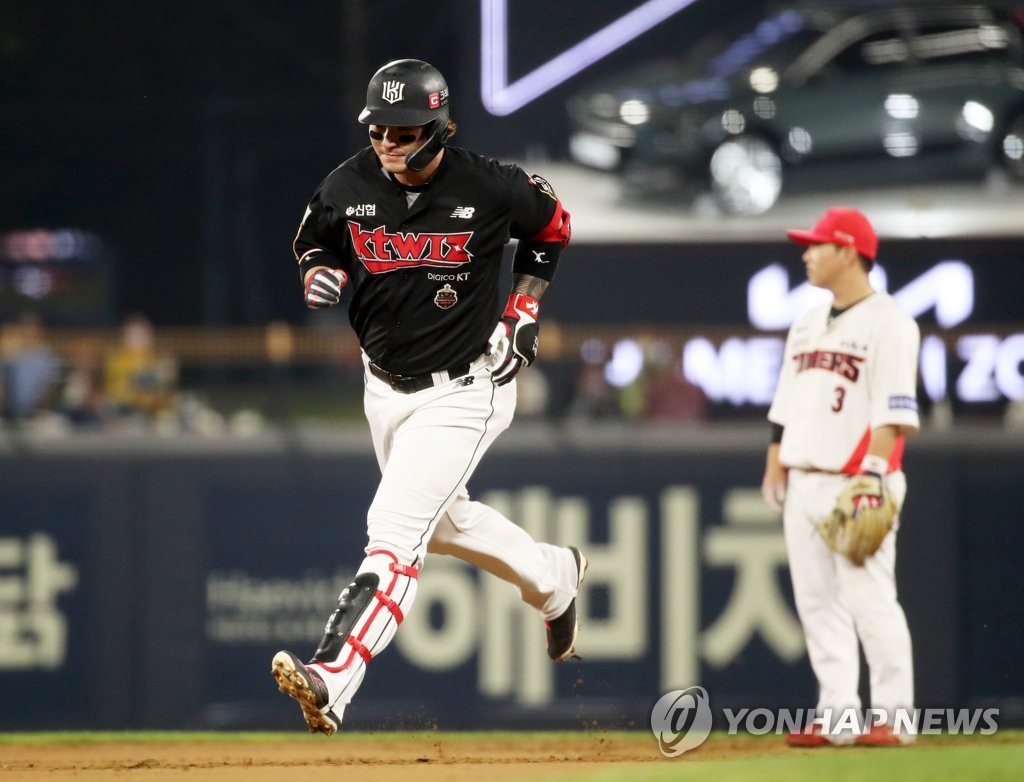