SEOUL, May 18 (Yonhap) -- South Korea will beef up monitoring of the cooking oil market and boost its supply chains on concerns over supply crunches and illegal hoarding, the agriculture ministry said Wednesday.

Global cooking oil prices have risen recently over the Ukraine crisis and Indonesia's export curbs, which have prompted some consumers here to stock up the item. Major food discount chains and online shopping malls accordingly have limited purchases of cooking oil per shopper.

During a meeting with the Ministry of Agriculture, Food and Rural Affairs, major domestic cooking oil suppliers, including CJ CheilJedang Corp. and Lotte Foods Co., said that they are not experiencing shortage as of now, securing a two- to four-month stockpile of cooking oil.

They are also expected to bring in contracted amounts of palm oil and other kinds of edible oil from overseas without a hitch.

Since late-April, Indonesia, the world's No. 1 palm oil exporter, has suspended shipments of cooking oil amid tight domestic supplies. But the measure has not directly affected the market here, as South Korean firms have bought palm oil from Malaysia, according to the ministry.

As for sunflower oil, the companies have secured replacement foreign suppliers, other than Ukraine and Russia, in the wake of the war in the region, it added.

Ukraine is the world's largest exporter of sunflower oil, accounting for nearly 50 percent of the total global supplies, followed by Russia, which produces about 23 percent of the world's supply. The ongoing crisis has also disrupted the shipments of oil products and pulled up the global prices.

"The companies said they currently have no plan to raise the prices of cooking oil. Chances are low that consumers here would have problems in buying cooking oil," the ministry said in a release.

Given that cooking oil is crucial for small merchants and everyday lives of the people, however, the government vowed to closely monitor the supply situation together with the related companies through a weekly meeting.

It also vowed to strengthen the monitoring of potential illegal hoarding, while seeking ways to support importers over global price hikes.

In the domestic market, the price of cooking oil has also been on the rise recently from 511 won (40 US cents) per 100 milliliters in January to 515 won in February and further to 530 won the following month, the data from the Korea Consumer Agency showed. 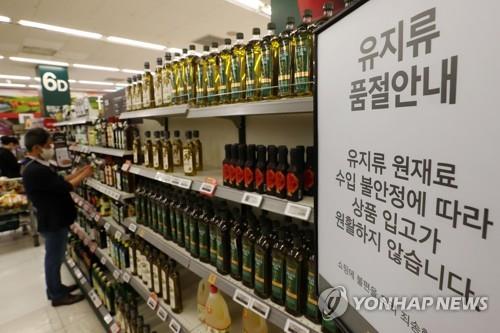