Trading volume was moderate at about 813 million shares worth some 9.39 trillion won (US$7.4 billion), with losers outnumbering gainers 504 to 339.

Institutions shed about a net 342 billion won worth of shares, while foreigners bought 290 billion won and retail investors snapped up 26 billion won in net value. 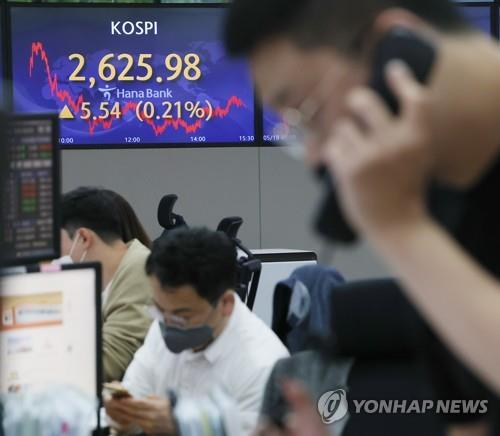 The market rose at the opening, boosted by Wall Street gains.

Powell said the Fed was prepared to act aggressively to bring down the highest inflation in four decades, while trying to stave off a recession.

"If that involves moving past broadly understood levels of neutral, we won't hesitate to do that," he said in a livestreamed interview by The Wall Street Journal.

"The U.S. market rallied not because of a particular event but because of bargain hunting with solid economic data," Na Jeong-hwan from Cape Investment & Securities said.

"The KOSPI won't be able to sustain its rising trend, as investors could begin a sell-off to cash in at a certain level."

The local currency closed at 1,266.60 won against the dollar, up 8.40 won from the previous session's close.