WASHINGTON, May 18 (Yonhap) -- North Korea is widely expected to stage a long-range or nuclear test before or even during President Joe Biden's trip to South Korea and Japan, U.S. National Security Advisor Jake Sullivan said Wednesday.

He said the U.S. is fully prepared to make any necessary adjustments to U.S. defense posture to ensure the security of the U.S. and U.S allies.

"With respect to the issue of North Korea, we have said from this podium, we said at the state department and we have indicated in quite clear terms that our intelligence does reflect the genuine possibility that there will be either a further missile test, including long range missile test, or a nuclear test or frankly both in the days leading into on or after the president's trip to the region," Sullivan said in a press briefing at the White House.

"We are preparing for all contingencies, including the possibility that such a provocation would occur while we are in Korea or in Japan," he added. 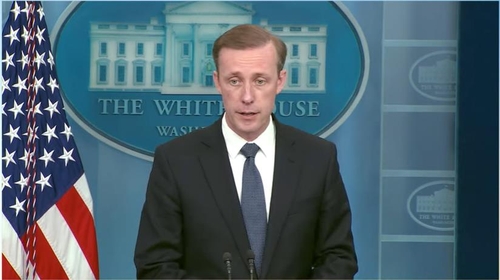 North Korea staged 16 rounds of missile launches this year, and the state department has said the recalcitrant country may be preparing to conduct a nuclear test as early as this month.

Pyongyang recently began reporting COVID-19 cases for the first time since the pandemic began over two years ago, prompting many to believe that the country may refrain from staging additional provocations, including a nuclear test, to prevent the spread of COVID.

However, State Department Press Secretary Ned Price said there was no "expectation" of any delays when asked Tuesday.

Sullivan reiterated that the U.S. is prepared for all possibilities.

"We are prepared, obviously, to make both short and longer-term adjustments to our military posture as necessary to ensure that we are providing both defense and deterrence to our allies in the region, and then we're responding to any North Korean provocation," he said.

The top security advisor said Biden's trip will highlight his commitment to U.S. alliances with the two countries, as well as to the entire region.

"He also intends to seize this moment, this pivotal moment to assert bold and confident American leadership in another vital region of the world, the Indo-Pacific," Sullivan said of the trip, which will mark Biden's first Asia tour since taking office in January 2021.

"On this trip, he (Biden) will have the opportunity to reaffirm and reinforce two vital security alliances, to deepen two vibrant economic partnerships, to work with two fellow democracies to shape the rules of the road for the 21st century," he added.

Sullivan said the two leaders will "consult on the challenge posed by the DPRK's nuclear and missile programs," referring to North Korea by its official name, the Democratic People's Republic of Korea.

Biden will also meet with technology and manufacturing leaders in South Korea, who are "mobilizing billions of dollars in investment here in the United States to create thousands of good paying American jobs," said Sullivan.

He, however, has no plan to visit the demilitarized zone (DMZ), White House Press Secretary Karine Jean-Pierre said, despite earlier reports in Seoul that the U.S. president was considering a visit to the 38th parallel.

The DMZ is a 4-kilometer wide buffer zone between North and South Korea. Biden visited the highly fortified area in 2001 and 2013 as then chairman of the Senate foreign relations committee and vice president, respectively.

Biden and Yoon are also expected to discuss Seoul's participation in the new U.S. Indo-Pacific Economic Framework (IPEF), which Sullivan said will be launched during Biden's visit to Tokyo.

The IPEF, Sullivan said, "is a 21st century economic arrangement, a new model designed to tackle new economic challenges from setting the rules of the digital economy to ensuring secure and resilient supply chains to managing the energy transition to investing in clean, modern high-standards Infrastructure."

Seoul officials have said Yoon will "virtually" attend the launch of the IPEF.

"We think this trip is going to put on full display President Biden's Indo-Pacific strategy, and that it will show in living color that the United States can, at once, lead the free world in responding to Russia's war in Ukraine, and at the same time chart a course for effective principled American leadership," said Sullivan.