SEOUL, May 19 (Yonhap) – The U.S. military has flown a reconnaissance plane toward the East Sea, an aviation tracker said Thursday, amid concerns about the possibility of another intercontinental ballistic missile (ICBM) launch by North Korea.

In a Twitter post, Aircraft Spots released an image showing an RC-135S Cobra Ball aircraft en route to the East Sea. It said the flight was to "monitor the North Korean missile launch window."

The previous day, Kim Tae-hyo, the first deputy chief of South Korea's presidential National Security Office, said that the North's preparations for an ICBM launch appear to be "imminent."

Citing a U.S. official, CNN also reported Tuesday that the North appears to be preparing for an ICBM test within the "next 48 to 96 hours," as the South and the United States are preparing for a summit between Presidents Yoon Suk-yeol and Joe Biden, set to take place in Seoul on Saturday. 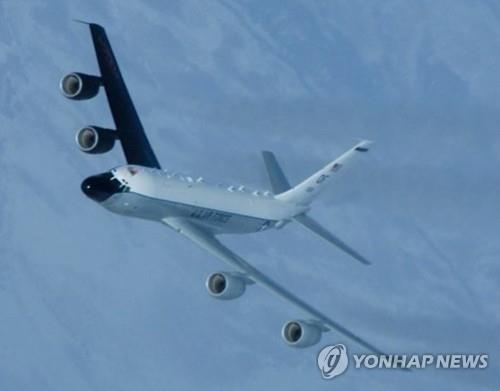