The EU has assessed a 25 percent duty on 26 kinds of South Korean steel products above its quotas since July 2018, which will remain in effect through June 2024 following a three-year extension last year.

During a virtual meeting of the South Korea-EU trade remedy task force, Seoul's Ministry of Trade, Industry and Energy said that the measure has negatively affected bilateral trade, as well as free and multilateral trade.

"We asked the EU to reconsider steel safeguard measures and to increase the quota" on South Korean galvanized steel sheets, the ministry said in a release, noting that South Korean companies' investments and production plans in Europe could be affected by difficulties in securing stable steel supplies in the region due to Russia's invasion of Ukraine.

Europe earlier claimed that the safeguard measure is in response to protectionist policies in the United States, which could cause a surge of steel imports into the EU. It also aims to provide ample access to third-country supplies of steel for users. 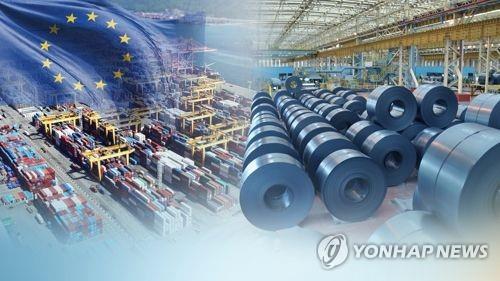