SEOUL, May 20 (Yonhap) -- An appeals court upheld a suspended prison term for Rep. Choe Kang-wook on Friday for fabricating an internship certificate for the son of former Justice Minister Cho Kuk, a penalty heavy enough to remove him from parliament if confirmed by the top court.

Choe, 54, was charged with business obstruction for falsely issuing an internship certificate for Cho's son in 2017, while he was working as a lawyer at a law firm. The document was used by the son in applying for graduate school admission.

Choe has insisted Cho's son did work as an intern, but the court did not accept the claim on the basis of contrary testimonies by law firm employees.

Choe said he will immediately appeal the ruling.

He will lose his proportional representation seat at the National Assembly if the sentence is finalized at the top court.

Under the law, elected officials are removed from office if sentenced to a prison term, including suspended ones, or fined 1 million won (US$788.6) or more. 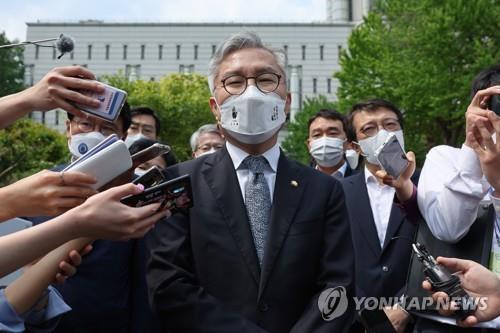