SEOUL, May 20 (Yonhap) -- Police significantly heightened security around the presidential office compound in the central Seoul district of Yongsan and other locations, as a number of rallies are planned ahead of U.S. President Joe Biden's three-day visit to South Korea, officials said Friday.

Biden is set to arrive in South Korea later Friday for his first summit with President Yoon Suk-yeol.

Police raised their security posture against possible emergencies to the highest level, as more than 50 rallies to welcome and oppose Biden's visit are expected to be held in Yongsan and adjacent areas until Sunday, the officials said. 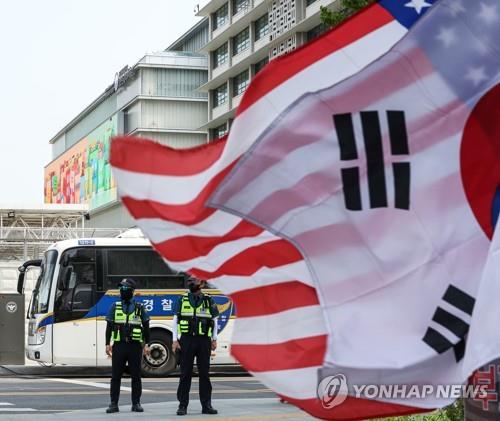 The Korean National Police Agency said it plans to deploy over 20,000 police personnel in Seoul and the surrounding Gyeonggi Province during Biden's visit. In particular, about 7,200 police security personnel will be mobilized Saturday, the day of the South Korea-U.S. summit talks, it added.

The police have also strengthened the security around the National Museum of Korea in Yongsan where a summit dinner is scheduled; the Grand Hyatt Seoul, also in Yongsan, where the U.S. president is likely to stay; and U.S.-related facilities, such as the U.S. Embassy and the U.S. ambassador's residence.

According to the police agency, several conservative civic groups have reported their respective plans to hold welcome rallies later Friday near Osan Air Base, south of Seoul, when Biden is due to land, and near the Grand Hyatt Seoul.

The People's Democracy Party, a political group of progressive activists, began a news conference at a Yongsan location across the street from the presidential office Friday to oppose Biden's visit and is expected to march toward the Grand Hyatt Seoul later in the day, the agency noted.

On Saturday, numerous groups of conservative and liberal activists are expected to hold rallies and marches in favor of and against Biden's visit around the Seoul National Cemetery, the presidential office and the Grand Hyatt Seoul throughout the day.

In addition, a conservative civic group filed a plan to organize a pro-Biden rally in front of the Grand Hyatt Seoul on Sunday, whereas a progressive activist group disclosed a plan to hold an anti-Biden rally on Gwanghwamun Square on the same day.

Police beef up security in places related to Biden's visit

Police beef up security in places related to Biden's visit