SEOUL, May 21 (Yonhap) -- President Yoon Suk-yeol and U.S. President Joe Biden are set to hold their first summit in Seoul on Saturday on a range of issues, including North Korea's nuclear program and supply chain risks.

Biden arrived the previous day on his first visit to the country as president and only 10 days after Yoon took office, as both countries claimed a North Korean nuclear or intercontinental ballistic missile test was imminent.

On the first stop of his three-day visit, Biden visited a Samsung semiconductor plant in Pyeongtaek, 70 kilometers south of Seoul, Friday. He was joined by Yoon and the two were given a personal tour of the sprawling compound by Samsung Electronics Vice Chairman Lee Jae-yong. 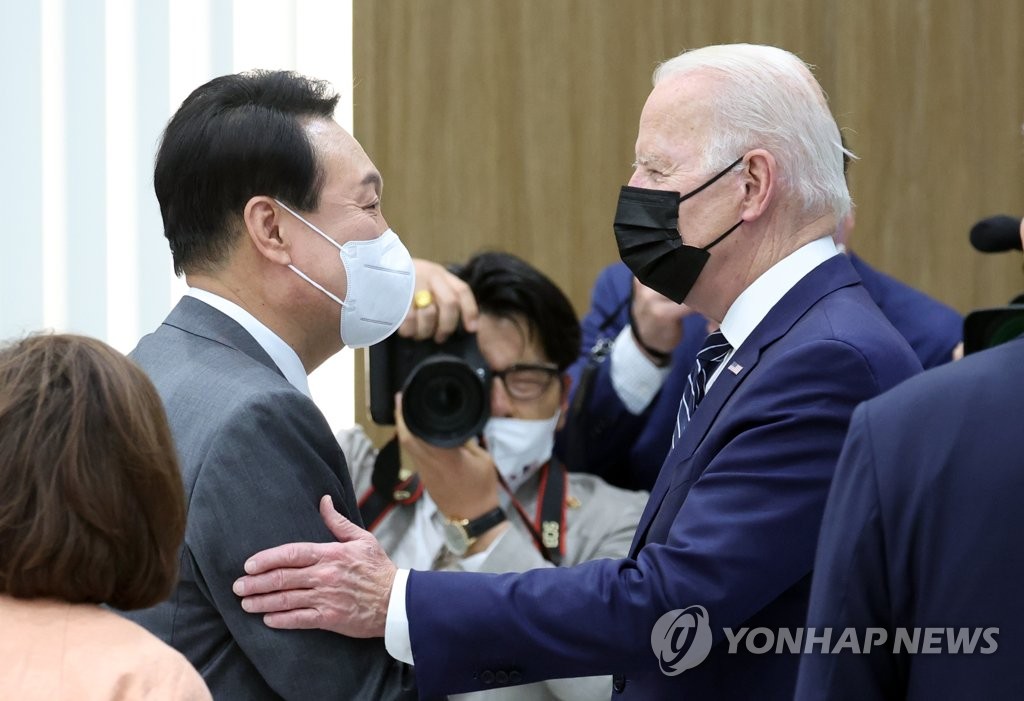 The visit underscored the two countries' commitment to working together to strengthen supply chains amid a post-pandemic global shortage of semiconductors.

Biden's second day in Seoul will include a visit to Seoul National Cemetery, where he will pay tribute to fallen soldiers, a summit with Yoon at the new presidential office in the central district of Yongsan, and a joint press conference. He will later attend a banquet hosted by Yoon at the National Museum of Korea.

During the summit, the two sides are expected to discuss the full range of security and economic challenges facing the allies and the region, including the growing threat of North Korea's nuclear and missile programs.

Kim Tae-hyo, first deputy director of the presidential National Security Office, told reporters earlier this week that the first thing the two sides will do will be to come up with an "action plan" for how South Korea and the United States will "strengthen the reliable and effective extended deterrence."

Extended deterrence refers to the U.S. deployment of both conventional and nuclear assets to defend an ally.

In the event North Korea carries out a major weapons test during Biden's stay, the two leaders will immediately take command of the two countries' combined forces, Kim said.

Yoon is also expected to use the summit to announce South Korea's participation in the Indo-Pacific Economic Framework, an initiative proposed by Biden to ensure secure and resilient supply chains, set the rules of the digital economy, and invest in clean, modern and high-standards infrastructure.

On Sunday, Yoon and Biden will jointly visit the Korean Air and Space Operations Center, a key Air Force operations center at Osan Air Base in Pyeongtaek, where they will be briefed on its activities and encourage South Korean and U.S. service members.

Biden will depart for Japan on Sunday afternoon to continue on the second leg of his tour.