SEOUL, May 20 (Yonhap) -- A Seoul court on Friday gave partial approval for a demonstration planned by a civic group near the new presidential office in central Seoul on the day of the upcoming summit between President Yoon Suk-yeol and Joe Biden.

The Seoul Administrative Court granted the permission to the People's Solidarity for Participatory Democracy, partially upholding the injunction it filed against a decision by police to ban the rally on Saturday.

The civic group planned to hold the rally from 8 a.m. through 10 p.m. by occupying two traffic lanes in front of the main gate of the defense ministry complex in Yongsan, where the presidential office is located, and the nearby War Memorial of Korea.

The rally was meant to call on the South Korean and U.S. governments to carry out their agreements with North Korea for peace, as Yoon and Biden were to hold a first summit there, according to the civic group.

The court, however, ruled that the rally should be held for five hours, starting at noon, and only take place near the war museum while taking up one traffic lane, citing the possibility of "unexpected incidents" that could disturb public order.

The ruling runs contrary to the decision by police to ban rallies and marches within the 100-meter radius of the new presidential office due to safety, traffic congestion and noise concerns.

According to the act on assembly and demonstration, rallies are banned within the 100-radius of the presidential residence, and the court said the current Yongsan office cannot be seen as a residence.

President Yoon relocated the presidential office from Cheong Wa Dae to Yongsan upon taking office earlier this month. He has commuted from his private residence in Seocho in southern Seoul, as work to remodel a foreign minister's official residence into the new presidential residence is now under way.

Last week, the court also allowed a LGBT rights group to conditionally stage a rally close to the presidential office in a decision over an injunction request. 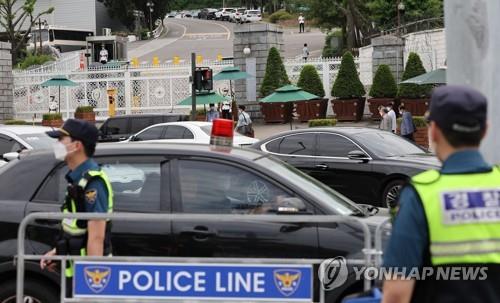