Earlier this week, a Japanese news agency reported that the new Yoon Suk-yeol government appears to be planning to have consultations with Japan on the premise that Tokyo will discharge contaminated water as planned, while the former Moon Jae-in government objected to the plan.

"Our government has never gone for Japan's Fukushima water release plan. We are concerned about some arbitrary and subjective media reports," Seoul's foreign ministry said in a text message sent to reporters.

The ministry vowed utmost efforts to come up with "needed responses to have the contaminated water be disposed in a way that meets international laws and standards and in a safe manner from objective and scientific perspectives," while continuing consultations with Japan.

In April 2021, Japan announced a plan to start discharging the radioactive water into the sea in 2023 in what is expected to be a decadeslong process, as all storage tanks at the Fukushima plant are expected to be full as early as fall of 2022. 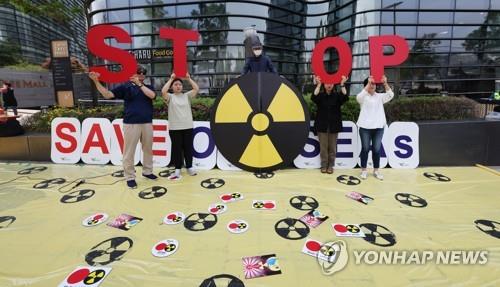