SEOUL, May 20 (Yonhap) -- U.S. President Joe Biden could have phone talks with former South Korean President Moon Jae-in while in Seoul, as their anticipated face-to-face meeting is unlikely to take place, according to a media report.

The Chosun Ilbo newspaper reported, citing a ruling People Power Party official, that Moon and Biden will have phone talks on Saturday afternoon and "ask after each other."

Biden arrived in South Korea on Friday for a three-day trip, during which he plans to hold his first summit with South Korean President Yoon Suk-yeol.

The presidential office under the former Moon government earlier said that Moon and Biden would meet in person during Biden's visit here upon the suggestion of the White House, but the U.S. side said earlier this week that it had not scheduled a meeting between the two.

Those close to Moon declined to comment on the matter.

Moon left office on May 9 after serving a five-year term and is now staying in his retirement home in the southeastern city of Yangsan. 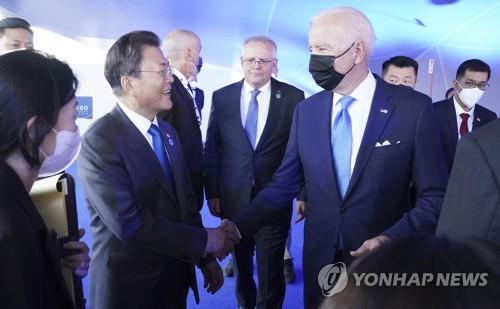 Biden may talk by phone with ex-President Moon while in S. Korea

Biden may talk by phone with ex-President Moon while in S. Korea