WASHINGTON, May 21 (Yonhap) -- U.S. President Joe Biden's trip to South Korea for early summit talks with his new counterpart reflects Washington's focus back on the region in its national security strategy and hope for Seoul's greater role in pending challenges, including North Korean threats and the raging war in Ukraine, experts here noted.

Biden picked Seoul as the starting leg of his first-ever Asia trip since his inauguration and had a summit with President Yoon Suk-yeol, who was sworn in less than two weeks earlier.

It underscored the U.S.' strong commitment to the defense of South Korea and other allies in the region amid North Korea's continued provocations that many expect will soon include a nuclear test, according to the experts.

"Biden's trip enables U.S. reaffirmation of the importance of the alliances to address the growing Chinese and North Korean threats, as well as urging both Seoul and Tokyo to assume a larger regional security role," Bruce Klingner, senior research fellow at the Heritage Foundation, a Washington-based think tank, said in his response to advance questions from Yonhap News Agency on the Yoon-Biden meeting. 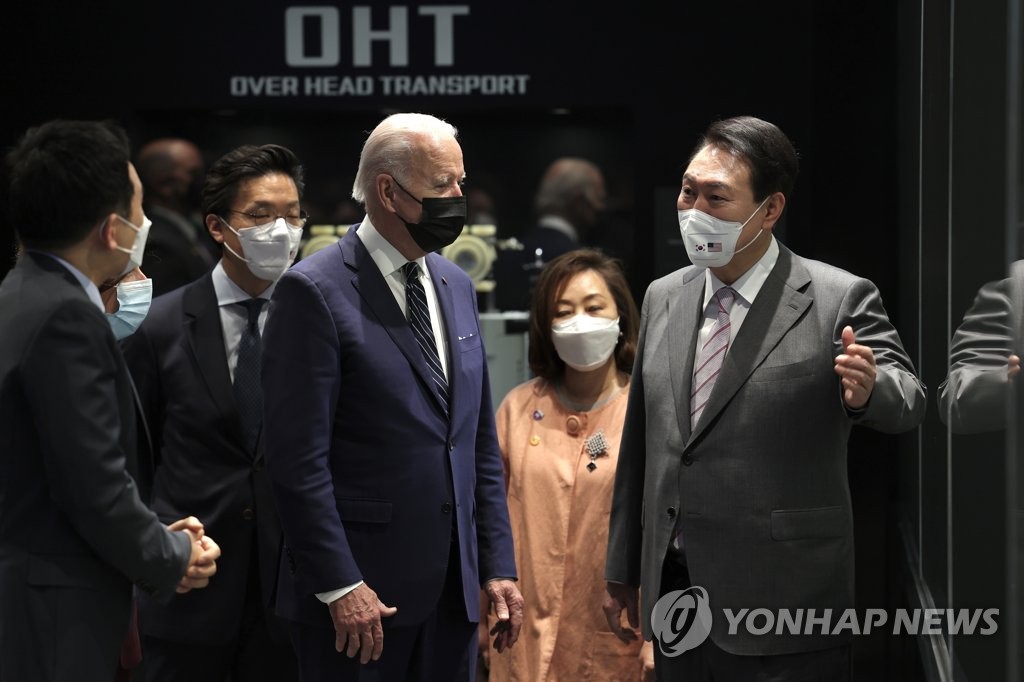 Biden arrived in Seoul on Friday with a plan to head to Tokyo on Sunday for a three-day stay.

"Redirecting focus back on Asia underscores the importance of the region to U.S. strategic interests," Klingner added.

Celeste Arrington, associate professor of political science and international affairs at George Washington University, also said, "President Biden's visit to Seoul and then Tokyo sends a strong signal of commitment to the key US allies in East Asia, especially coming so early in President Yoon's term."

"While the alliance is much deeper than just the leaders' relationship, it will help the alliance and Yoon's ambitions for elevating and diversifying the ROK's role if the leaders can establish good working relations," she added, referring to South Korea by its official name, the Republic of Korea.

In his inauguration speech, Yoon vowed to turn South Korea into what he called a "global pivotal state" that contributes to freedom, peace and prosperity.

Ellen Kim, deputy director of the Korea Chair at the Center for Strategic and International Studies (CSIS), noted Biden's trip to Asia amid the war in Ukraine further underscored the importance of the region to the U.S.

"The very fact that the White House has been consumed by the war in Ukraine makes Biden's first Asia trip all the more important," she told Yonhap News Agency. "More broadly, this trip also provides Biden an opportunity to demonstrate the U.S. commitment to the Indo-Pacific.

"Biden's decision to meet with new South Korean President Yoon Suk-yeol prior to his visit to Japan highlights the importance the Biden administration places on South Korea as an ally and strategic partner in the U.S. Indo-Pacific strategy," Kim added.

Arrington agreed, saying, "Biden's trip to Asia is a reminder that Russia's war on Ukraine is not the only serious security and trade issue facing the United States and its allies, and Washington can best handle multiple challenges, including the DPRK and China, by coordinating closely with its allies and emphasizing its allies' commitment to democratic values."

The U.S. leader's trip to South Korea also emphasized strong U.S. commitment to the defense of its ally against an increasingly provocative North Korea, the experts said.

"The Biden-Yoon summit demonstrated that Washington and Seoul are in alignment on North Korea policy based on the strong U.S.-ROK alliance and with a complete, verifiable and irreversible denuclearization of North Korea as a common goal," Kim said.

"Thus, Pyongyang will likely perceive no room to drive a wedge between Seoul and Washington," she added.

North Korea has so far staged 16 rounds of missile tests this year, including at least three tests of intercontinental ballistic missiles.

U.S. officials, including National Security Adviser Jake Sullivan, have said Pyongyang may conduct its seventh nuclear test in days "leading into, on or after" Biden's trip to the region.

Biden reaffirmed the U.S. commitment to engage with North Korea but offered no specific means to bring Pyongyang back to the dialogue table.

"While I have low hopes that North Korea will respond, I think Biden and Yoon should continue to reach out to the DPRK," Arrington said when asked if the message from the U.S. president himself would be enough to induce North Korea back to the table.

"Offers of vaccines and other COVID aid right now make the most sense, even though Pyongyang seems intent on just getting those from China and Russia," she added.

Kim, the CSIS expert, agreed what is important to North Korea is what the message contains, not who it comes from.

"If the message was about sanctions relief on the humanitarian grounds, which is highly unlikely by the way, North Korea will be interested in dialogue with Washington," she said.

"The point I am trying to make here is that what is in the message matters for North Korea more than whether the message comes directly from the U.S. president," Kim added.

Pyongyang has stayed away from denuclearization talks with the U.S. since late 2019. It has remained unresponsive to the Biden administration's overtures, Washington officials have noted.