SEOUL, May 21 (Yonhap) -- In the midst of North Korea's nuclear brinkmanship and China's increasing assertiveness, South Korean President Yoon Suk-yeol and his U.S. counterpart, Joe Biden, delivered an unequivocal message during their first summit talks Saturday: The time-honored bilateral alliance will not only deepen its security dimension but also broaden it going forward.

In their Seoul meeting, the two agreed to start discussions on expanding the allies' military exercises and reactive a key deterrence dialogue "at the earliest date" while reaffirming the U.S.' commitment to deploying its strategic military assets "in a timely and coordinated manner."

Adding the "economic security" element to the alliance, the leaders agreed to seek the launch of a related forum between their National Security Councils and cooperate to develop the Indo-Pacific Economic Framework (IPEF), a U.S.-led drive seen as an effort to counter China's regional influence.

The summit, held less than two weeks after Yoon's inauguration, came amid growing concerns about the possibilities of North Korean provocations, like a long-range ballistic missile or nuclear test, China's maritime assertiveness and Russia's war in Ukraine.

"For decades, our alliance has been a linchpin for regional peace, and growth and prosperity, and it's been vital to deterring attacks from the DPRK, and today, our cooperation is essential to preserve the stability and global -- on the global stage as well," Biden said during the summit, referring to North Korea by its official name, Democratic People's Republic of Korea. 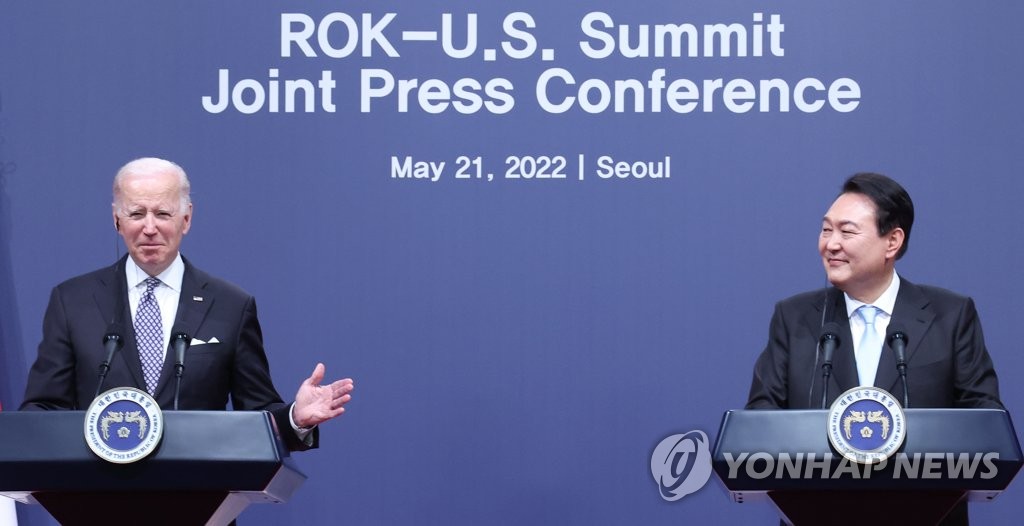 "Our two nations are working together to take on both the opportunities and the challenges of the moment: continuing to fight COVID-19, securing the supply chains, tackling the climate crisis, deepening our security cooperation to meet regional challenges, and writing the rules of the road to ensure the Indo-Pacific is a free and open area," he added.

As expected, joint efforts to rein in the North's evolving nuclear and missile threats were high on the agenda.

Yoon and Biden agreed to initiate dialogue on expanding the "scope and scale" of combined military exercises, and training on and around the Korean Peninsula, according to their joint statement.

On the defense exercises, Yoon pointed out he and Biden discussed the need for "combined exercises in various formats in preparation against nuclear attacks."

Yoon has already vowed to "normalize" those exercises that the preceding Moon Jae-in administration had scaled down as part of an effort to facilitate diplomacy with the North.

The leaders also agreed to reactivate the high-level Extended Deterrence Strategy and Consultation Group. The dialogue channel was suspended in 2018, but the Yoon administration has sought to restore it to enhance the credibility of extended deterrence, a U.S. commitment to using a full range of its military assets, including nuclear ones, to defend its ally.

Biden reaffirmed Washington's commitment to deploy "strategic" military assets to Korea "in a timely and coordinated manner as necessary." But the leaders stopped short of specifying the type of strategic assets to be mobilized and reaching a deal on a regular dispatch, which would send a stronger signal to the recalcitrant North. Strategic assets refer to formidable military hardware, such as nuclear-capable bombers, nuclear-powered subs and aircraft carriers.

Despite the talk of such security plans, the presidents reiterated the "path to dialogue remains open toward peaceful and diplomatic resolution" with the North, and called on the reclusive country to return to negotiations.

Aside from the allies' security coordination against the North, the theme of "economic security" took center stage in their summit this time.

"As the issue of securing supply chains for materials necessary for our everyday lives and industrial production is directly linked to our people's livelihoods and economy, this should be dealt with on the same footing as national security and military security," Yoon said.

During the summit, the two sides stressed the importance of "secure, sustainable and resilient" global supply chains.

The shared commitment even covers the defense industry, as Yoon and Biden agreed to "strengthen partnerships in areas such as defense sector supply chain, joint development and manufacturing, including beginning discussions on a Reciprocal Defense Procurement agreement."

The leaders' message for the allies' deeper engagement on economic and technology fronts started to play out upon Biden's arrival here Friday. His three-day trip began with a tour, together with Yoon, of Samsung Electronics' key semiconductor factory south of Seoul.

The spectacle of the leaders putting their respective signature on a separate semiconductor wafer -- rather than on visitors' book at the chip factory -- highlighted their commitment to forging a broad-based partnership transcending its security focus.

"We're standing at an inflection point in history, where the decisions we make today will have far reaching impacts on the world we leave to our children tomorrow," Biden said at the factory in Pyeongtaek, 70 kilometers south of Seoul.

Dubbing the allies' partnership the "Global Comprehensive Strategic Alliance: Beyond the Korean Peninsula," Yoon and Biden also reaffirmed their commitment to tackling global challenges, like climate change and the COVID-19 pandemic.

The leaders' joint statement included a message apparently for an increasingly assertive China.