SEOUL, May 23 (Yonhap) -- The U.S.-led Indo-Pacific Economic Framework (IPEF) is likely to be a greater economic bloc in the region than the mega trade pact of the Regional Comprehensive Economic Partnership (RCEP) that includes China in terms of population and economic scale, Seoul's industry ministry said Monday.

Earlier in the day, U.S. President Joe Biden formally announced the launch of the new framework, which involves a total of 13 nations, including the United States, South Korea, Japan, Australia, New Zealand, India, and seven out of the 10-member Association of Southeast Asian Nations (ASEAN).

The total population of the 13 countries came to 2.5 billion as of 2020, representing 32.3 percent of the world's total, and their combined gross domestic product (GDP) stood at US$34.6 trillion, or 40.9 percent of the global total, according to the Ministry of Trade, Industry and Energy.

In comparison, the RCEP, which is known as the world's biggest free trade agreement, has 15 members, including South Korea, China, Japan and 10 ASEAN nations. They have 2.27 billion people, and their GDP came to $26.1 trillion, the ministry said in a release.

The IPEF is widely seen as part of the Biden administration's efforts to counter China's growing influence in the region after former President Donald Trump withdrew the U.S. from the Trans-Pacific Partnership (TPP) in 2017.

The IPEF will cover four key areas of fair trade, supply chain resilience, infrastructure and green technology, and tax and anti-corruption, though it will not include any tariff elimination and increased market access as it does not produce a traditional free trade agreement. 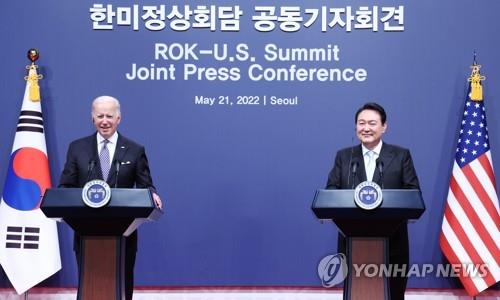 The IPEF will also be a larger-scale regional economic cooperation platform than the Comprehensive and Progressive Agreement for Trans-Pacific Partnership (CPTPP).

The CPTPP involves 11 nations, including Japan, Canada, Singapore, Australia, New Zealand, Mexico and Vietnam. The total population of the member nations came to 510 million, and their GDP was 10.8 trillion won, the data showed. South Korea and China are working to join the CPTPP.

"The active participation of the IPEF from the outset is expected to allow the country to play a leading role over the course of discussions of trade norms in the region," the ministry said in a release.

"It is also expected to help our companies ensure stable and diversified supply chains, boost competitiveness and expand business chances overseas," it added.