SEOUL, May 24 (Yonhap) -- There were two South Korean players in the Premier League in the just-concluded season. One, Son Heung-min of Tottenham Hotspur, had a banner campaign, becoming the first Asian player to win the Golden Boot as the scoring champion. The other, Hwang Hee-chan of Wolverhampton Wanderers, watched from afar as his longtime South Korean teammate made history.

And Hwang, 26, doesn't want to just admire Son's success. He wants to be like the man they call "Sonny." 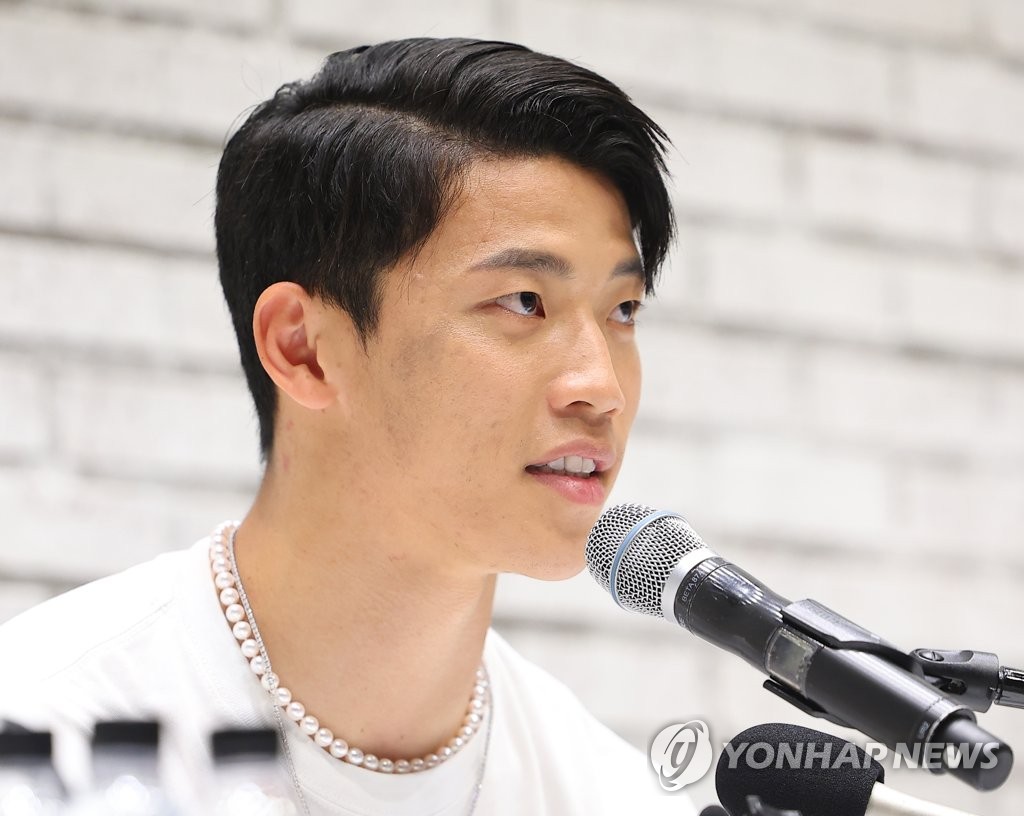 "He had such a great season. I am proud of the way he represents the country, when there are so few Asian players (in the Premier League)," Hwang told reporters Tuesday at a press conference in Seoul, an occasion marking the end of his first Premier League season. "Whenever I see him, it motivates me to play as well as he does. And I would love to keep getting better and challenge his record.

"I think a lot of football players see Heung-min as their role model, and I respect him a great deal as a fellow athlete," Hwang added. "Since we play in the same league, I congratulate him whenever he scores, but at the same time, I want to play better myself. I don't want to just say, 'He's great,' and stop there."

Back in August, Hwang, 26, left his German club RB Leipzig to join Wolves on a loan deal. He left a strong first impression by scoring three times in his first four matches.

However, Hwang added only two more goals over the next 26 matches. His last goal came on Feb. 24. 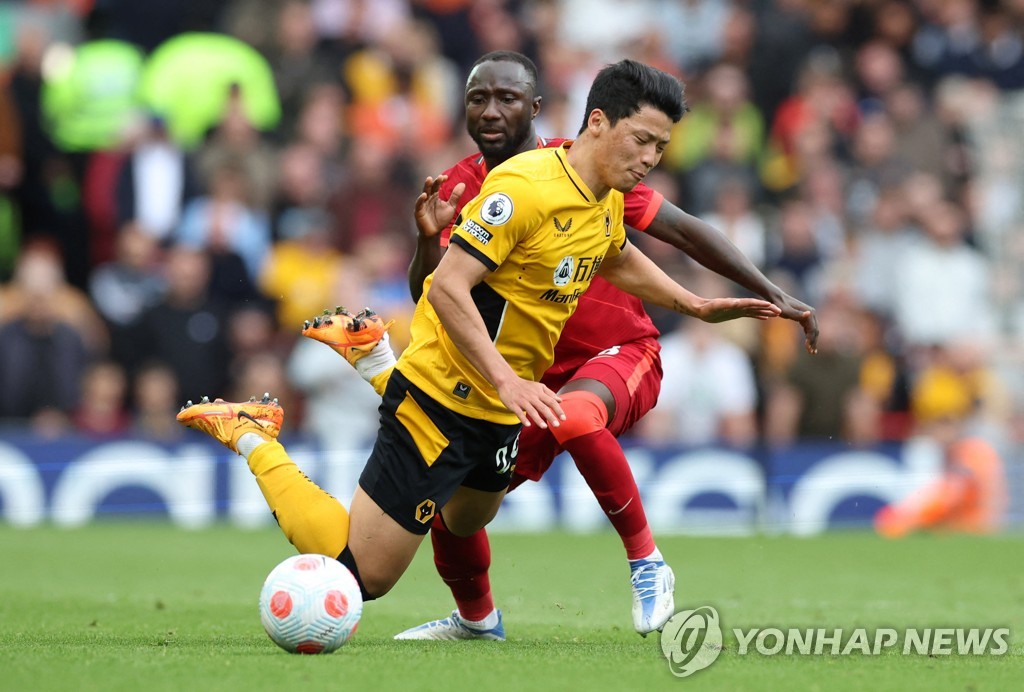 Hwang admitted he had more than a few regrets about the way his first English season played out, with a mid-December hamstring injury disrupting his groove.

"It was an abrupt move from Germany to the Premier League. I was thrown into action right away and scored some goals, and the team was doing well early on, too," said Hwang, whose club finished the season in 10th place. "But then I got hurt, just when I thought I was making good adjustments (to the new league). So that was disappointing."

Hwang said he was proud of the way he pushed himself hard during his rehab.

"There are so many great players in the Premier League, and I had a lot to learn," Hwang said. "There were some matches where I felt I had played well but I didn't have any goal or assist to show for all the work. To take the next step, I should be able to execute team plays and still produce goals and assists." 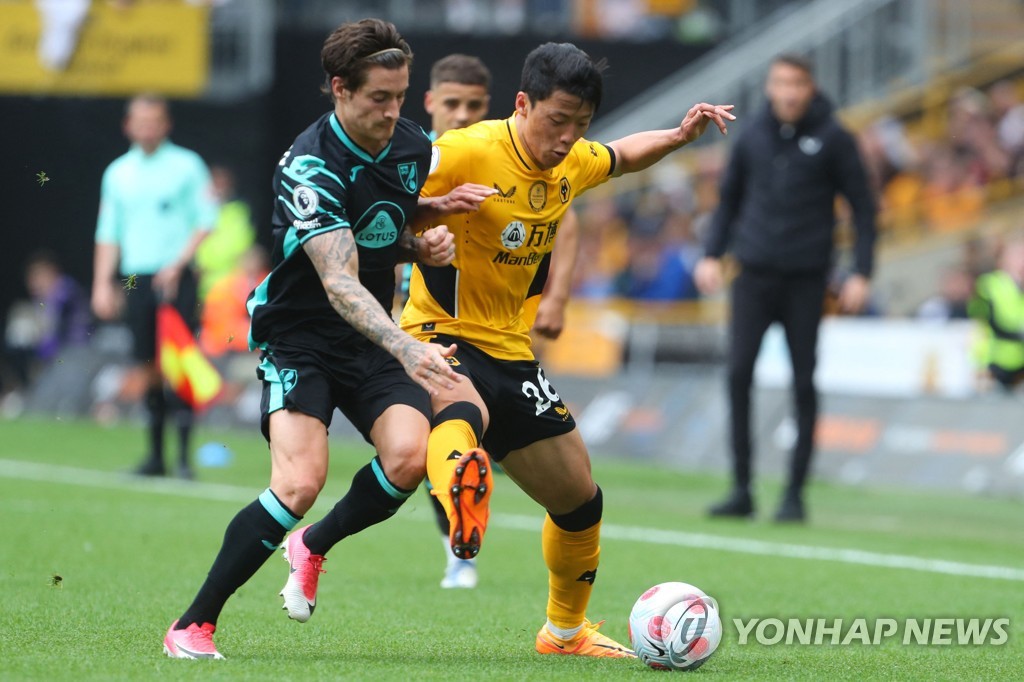 And this is where lessons Hwang has taken from Son come in.

"Athletes all experience slumps, and how you overcome them is really important," Hwang said. "I've always admired the way Heung-min shakes off criticism. He sets a great example to follow."

Son and Hwang will be reunited on the national team next Monday, when training camp opens ahead of friendly matches in June.

As tuneups for the FIFA World Cup in Qatar this year, South Korea will host Brazil on June 2, Chile on June 6 and Paraguay on June 10. The Korea Football Association is also trying to schedule a fourth match on June 14, likely against an African opponent.

Hwang said he hasn't thought much about the World Cup yet. If he stays healthy, Hwang will most likely make the World Cup roster alongside Son.

Hwang said he and Son often have long conversations about how to play better for the country whenever they meet on the national team. Their discussion this time will likely center on facing Brazil, the top-ranked team in the world.

"We obviously have to be better (than the 3-0 loss to Brazil in 2019)," Hwang said. "Since we're playing at home this time, we want to put on a good performance for our supporters."

Hwang joined Wolves on a loan deal but will have more security, after agreeing to a permanent transfer in January. The new deal kicks in on July 1 and will take him through 2026. 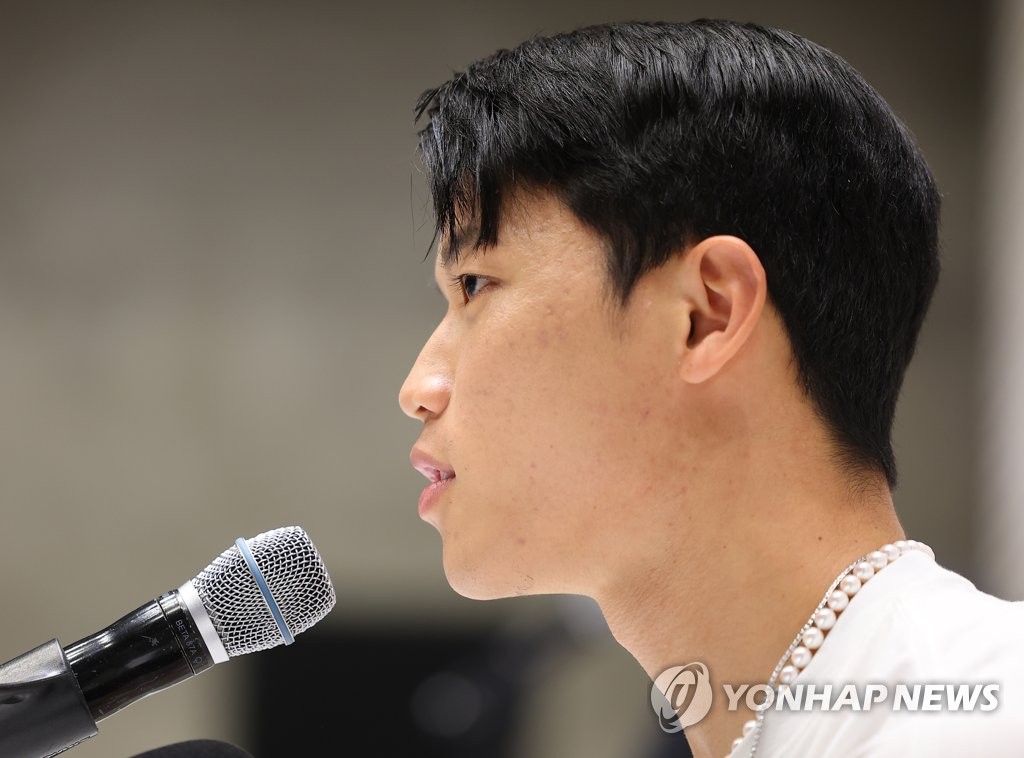